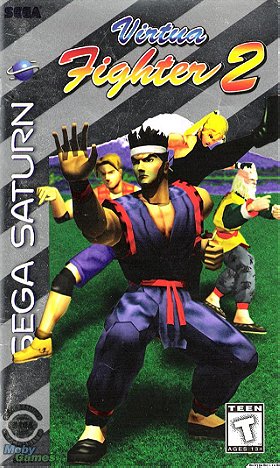 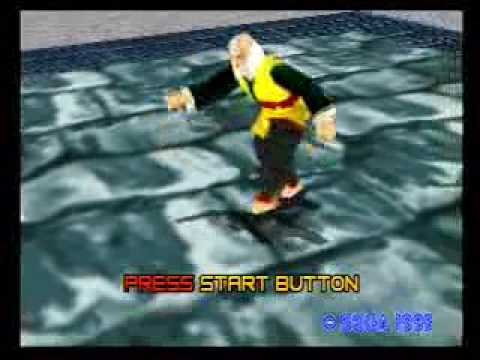 Home port of Sega's popular Model 2A arcade vs. fighter released in 1995. Game modes include classic arcade mode, 2P vs mode, Expert mode (where the computer character progressively learns and counters players' technique), Ranking Mode (similar to Arcade, but at the end, a fighting style analysis is shown based on number of specials and time to knock down an opponent), Team Battle Mode (two teams composed of five fighters go against each other, the first to beat five characters being the winner) and Watch mode (allows choosing two fighters and then see them fighting). Both VF2 and VF2.1 (a tweaked version available only in Japan) modes are included. Gameplay keeps the same style from the first game, adding more moves to each fighters' roll. Using a three-key layout (block, kick and punch, being possible to assign button combinations to the extra keys) the player is able to control their fighter, aiming to knock or push the opponent outside the rink inside the time limit. Combo moves range from the quickest, which require the player to push up to five buttons quickly, to strong moves that require more button presses along d-pad nudges to be successful. As with the previous game, fighting is realistic (except the physics-defying leaps), and each fighter has nothing but their body to harm the opponent.

redComicsar added this to wanted list 2 years, 10 months ago

Alchemist1306 added this to wanted list 4 years, 1 month ago

retrosegaworld added this to owned list 4 years, 11 months ago

Gumtierl added this to wanted list 4 years, 12 months ago

Elusuariodiverso rated this 8/10 6 years ago

Guntirl added this to wanted list 6 years, 1 month ago

Georgini added this to a list 6 years, 3 months ago
Steam Collection (53 games items)

Exclusive added this to a list 6 years, 7 months ago
My Steam Collection (381 games items)