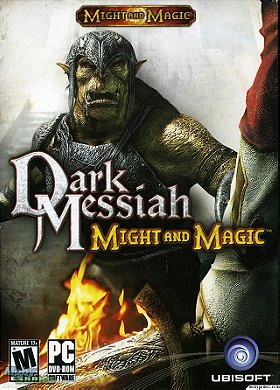 Dark Messiah of Might & Magic is a 1st-person action game set in the medieval age so instead of guns you use swords, bows and magic to defeat your enemies. As you progress through the story you obtain skill points which you can invest in one of three skill trees called Combat, Magic and Stealth. How you skill Sareth directly influences the combat in the game. You can either play like an assassin and backstab your enemies to oblivion or make him a perfect sword-fighter who can use different combos to take out his enemies for example.

But you can also use your environment to make your kills. There're countless items you can lift up and throw at your enemy or you can light up your arrow on a campfire nearby to inflict more damage. You can also make good use of your foot and kick your enemies off cliffs or kick them into spikes that come out of the wall or use other traps that are scattered in the levels like bringing a statue to a fall.

The main innovation in Dark Messiah is the so-called Body Awareness System. This basically means that Sareth is a real part of the world like every other NPC. This makes not only the whole combat more intense because your whole body moves with every sword-swing you make but the NPCs can interact more directly with you. For example a Orc can take you by your neck and throw you through the room.

If you've already saved (or damned) the world you can turn to the multiplayer-mode. There you've access to five different character classes from the knight to the priestess. With each kill you make you earn experience points and increase in rank. Then you get skill points you can invest in your skill tree to get new talents or upgrade existing ones. This is most important in the Conquest game-mode in which you play various maps in a row and keep your level between all the way. In the Conquest-mode two teams (Humans and Undead) fight over the possession of the flags on a map. Once one team holds all flags, it wins and the next map is loaded. But there's also normal (Team-)Deathmatch available. ... (more) (less)
Manufacturer: UBI Soft
Release date: 24 October 2006
EAN: 0008888683155 UPC: 008888683155
Tags: Action (1), Fantasy (1), RPG (1), Multiplayer (1), PC (1), Completed (1)
My tags:

Laires added this to wanted list 1 month, 2 weeks ago

salmoneado added this to wanted list 5 months, 1 week ago

bergendoc added this to a list 2 years, 6 months ago
RPG (514 games items)

haroun added this to a list 2 years, 10 months ago
completed Games (389 games items)

erete792 added this to owned list 3 years, 1 month ago

karapalida added this to wanted list 3 years, 5 months ago

SavvyNormal added this to owned list 3 years, 6 months ago

Mirosan added this to a list 3 years, 10 months ago
Top RatedPC-Listal1STquarter2015 (885 games items)

otakudi added this to owned list 4 years, 1 month ago

X-Vector added this to owned list 4 years, 5 months ago

Elusuariodiverso rated this 8/10 4 years, 6 months ago

Marcie added this to a list 5 years, 6 months ago
PC Games (30 games items)

Jake_The_Dog added this to a list 5 years, 6 months ago
Games Finished (261 games items)