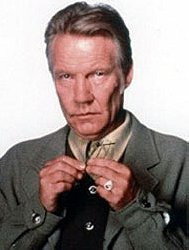 30 votes
They were contenders for these roles (473 items)
list by cudion
Published 8 years, 8 months ago

View all David Hemblen pictures
English-born actor who frequently worked in Canadian film, television and theatre who grew up in Toronto, Ontario. He is known for his role as George in La Femme Nikita, Customs inspector in Atom Egoyan's Exotica, Lord Dread/Lyman Taggert in Captain Power and the Soldiers of the Future, Detective Dick Hargrove in T. and T. and as Inspector Winterguild in TekWar: TekLords. He is also known for his role as Johnathan Doors in Earth: Final Conflict and for voicing the character of Magneto in the X-Men animated series from 1992 to 1997.
Tags: Born 1941 (2), Died 2020 (2), English (1), Canadian (1), Actor (1), Died Aged 79 (1), British-born (1)
My tags:

3. The Jungle Book: The Adventures of Mowgli

4. The Jungle Book: The Adventures of Mowgli