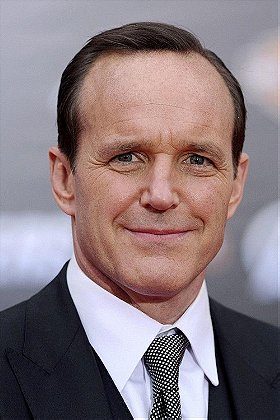 Gregg was born in Boston, Massachusetts, to an Episcopalian priest father, Bob Gregg. He grew up in Chapel Hill, North Carolina.

Gregg attended Ohio Wesleyan University as an undergraduate and went on to get a BFA from New York University, Tisch School of the Arts, where he finished in the class of 1986.
Career

Gregg has been featured in a number of supporting roles in films, such as Lovely & Amazing, In Good Company, and The Human Stain, and a number of guest spots on TV series, such as Will & Grace, Sports Night, Sex and the City and The West Wing. He also wrote the screenplay for the 2000 thriller What Lies Beneath.

He is the director and screenwriter of the 2008 film Choke, based on the Chuck Palahniuk novel of the same name, starring Sam Rockwell.

In 2008, Gregg appeared in the film Iron Man as S.H.I.E.L.D. agent Phil Coulson. In 2010, Gregg reprised his role as Agent Coulson for Iron Man 2. Gregg had since signed up for a multiple film deal as the character with Marvel Studios. In 2011, he returned again as Coulson for Thor. Gregg noted his being a part of the expanding Marvel Cinematic Universe as being very exciting, "Agent Coulson was one of the guys who wasn't really in the comic books, and he was a very kind of small role in 'Iron Man," he said, "and I was just very lucky that they chose to expand that character and chosen to put him more into the universe of it. It's really a blast!" Following on from his appearance in Thor, he will again reprise his role in The Avengers. In October 2010, Gregg was part of the cast of a staged reading of Larry Kramer's The Normal Heart alongside Dylan Walsh, Lisa Kudrow, and Tate Donovan, presented in Los Angeles on the occasion of the play's 25th anniversary (and preceding the play's 2011 Broadway premiere, which retained elements of this staged reading); the reading was directed by his father-in-law, Joel Grey.
Personal life

Gregg has been married since July 21 2001 to actress Jennifer Grey. The couple have one child, daughter Stella, born December 3, 2001. He co-starred with Grey in the Lifetime TV movie Road to Christmas.

A founding member of the Atlantic Theater Company in New York City.

3. What If... The World Lost Its Mightiest Heroes?

unicornsugar added this to a list 3 years, 9 months ago
Faces: The Northeast (66 person items)

Nikki added this to a list 5 years, 4 months ago

yreesesfreak added this to a list 5 years, 10 months ago

diabolical dr voodoo added this to a list 6 years ago

The People on the MCU (175 person items)

Emmabell added this to a list 6 years, 8 months ago
Siblings Here, Lovers There? (48 person items)