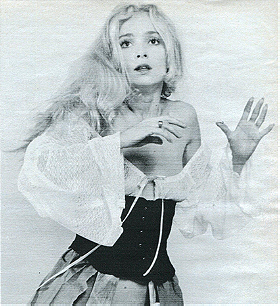 Smith was born in Los Angeles, California. Her first film appearance was in the short The Birth of Aphrodite, after a friend of her mother suggested her for the role. This led to supporting roles in other films, including the cult classic B-movies Caged Heat, Phantom of the Paradise, The Swinging Cheerleaders, Revenge of the Cheerleaders, The Pom Pom Girls, The Incredible Melting Man, Laserblast and a cameo role in Cheech and Chong's Up in Smoke. Perhaps her most striking role in a major release was in a violent bedroom scene opposite a near unknown Sylvester Stallone in the 1975 version of the Phillip Marlowe classic Farewell My Lovely starring Robert Mitchum. Her starring debut was in the cult horror film Lemora.

An accomplished musician and artist, Smith was briefly associated with The Runaways during the production of the motion picture We're All Crazy Now, after Sandy West and Lita Ford quit the group in pre-production. An impromptu group was created on the spot, casting Smith through her counsel Stann Findelle and Runaways manager Toby Mamis. The group was fronted by Joan Jett with Smith on the drums as "Sandy". She briefly continued playing drums for Joan Jett after that band's breakup.

Smith cut an album with a band known as the "L.A. Girls", as the drummer and lead singer.

She was once a Penthouse Pet of the Month.

Kendraatje posted a image 2 years ago