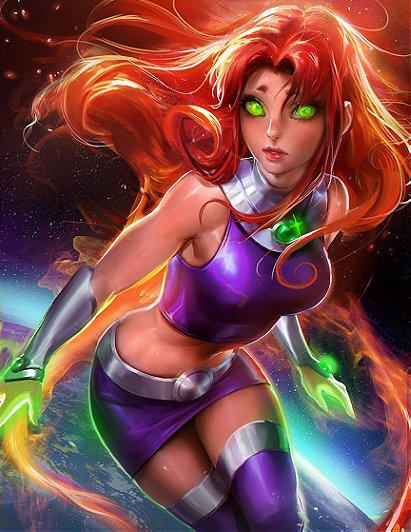 2 votes
View all Starfire pictures (128 more)
[Link removed - login to see]
Comic book character published by DC Comics. The most prominent Starfire is Koriand'r, the fourth character to use that name. She debuted in a preview story inserted within DC Comics Presents #26 (October 1980) and was created by Marv Wolfman and George Pérez. In 2013, Starfire placed 21st on IGN's Top 25 Heroes of DC Comics. She was ranked 20th in Comics Buyer's Guide's "100 Sexiest Women in Comics" list.

Koriand'r, Starfire's given name, is a princess of the fictional planet Tamaran in the Vegan system, and was in line to rule the planet as Queen. Komand'r ("commander", also known as Blackfire), her older sister, developed a bitter rivalry with her after suffering a disease in infancy that robbed her of the ability to harness solar energy to allow her to fly, and by extension, her right to the throne. This rivalry continued and intensified when the siblings were sent for warrior training with the Warlords of Okaara. Things came to a head during a sparring exercise in which Komand'r attempted to kill her sister. As a result, Komand'r was expelled and she swore vengeance.

That revenge came in a plot where Komand'r betrayed her planet by supplying detailed information about Tamaran's defenses to their enemies, the Citadel. They conquered Tamaran with ease, and the surrender conditions included the enslavement of Koriand'r, who was never permitted to return, since that would mean the Citadel would devastate the planet for abrogating the treaty. To Kory's horror, she learned that Komand'r was her master; Koriand'r's older sister made the most of her sibling's years of horrific servitude. When Koriand'r killed one of her captors, Komand'r decided to execute her as punishment, but the sisters were attacked and captured by the Psions. Psions, a group of sadistic alien scientists, performed a deadly experiment on both sisters to see how much energy their Tamaranean bodies could absorb before exploding from the overload. During the procedure, Komand'r's forces attacked the Psion ship to retrieve her. While the Psions were distracted, Koriand'r broke free using her starbolts - destructive blasts of solar energy - which were a result of the experimentation. Against her better judgment, she decided to free Komand'r, who was still absorbing energy. However, far from grateful, Komand'r struck her sister down with the same, but more intense, power, and had her restrained for later execution.

Koriand'r escaped by stealing a spacecraft to flee to the nearest planet, Earth, where she met the first Robin and his compatriots; she joined them in forming the Teen Titans. She became a charter member of this team and remained a member for years; during this time she was frequently romantically involved with Robin.

edlongshanks rated this 10/10 1 week ago

krosis added this to a list 3 months, 3 weeks ago

princesstwi added this to a list 1 year, 1 month ago
Energy Projection (20 characters items)

princesstwi added this to a list 1 year, 1 month ago
Superhuman Strength (89 characters items)

princesstwi added this to a list 1 year, 1 month ago
Flight (67 characters items)

nicolee added this to a list 1 year, 2 months ago
Favorite Characters (16 characters items)

princesstwi added this to a list 2 years, 4 months ago
Favorite Characters (8 characters items)

princesstwi added this to a list 2 years, 4 months ago
DC vs. Marvel Character Battles (50 characters items)

Nikki added this to a list 2 years, 5 months ago

Bollyver voted for an image 2 years, 8 months ago

queenmary voted for 15 images [View All] 2 years, 9 months ago

Joeyxzx voted for an image 3 years ago

Nikki added this to a list 3 years, 9 months ago
Sexiest Female Superheroes (and Villains) (15 characters items)

Nikki added this to a list 3 years, 9 months ago
Sexiest Female Superheroes (and Villains) (15 characters items)

upgradeslinky rated this 4/10 4 years, 2 months ago