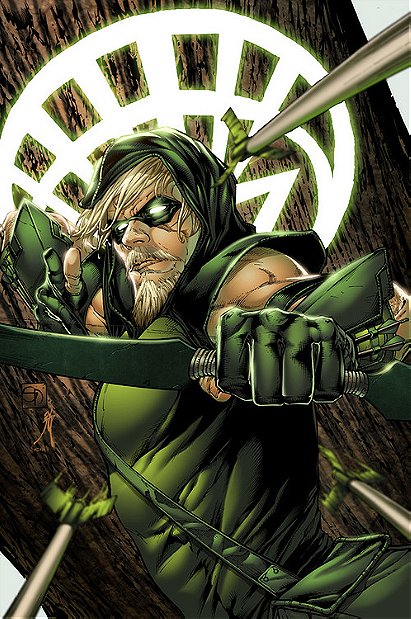 27 votes
Who Were In The Original Justice League? (42 items)
list by Ricky49er
Published 5 years, 9 months ago

1 vote
View all Green Arrow pictures (113 more)
[Link removed - login to see]
Green Arrow is a fictional character, a superhero that appears in comic books published by DC Comics. Created by Morton Weisinger and designed by George Papp, he first appeared in More Fun Comics #73 in November 1941. His real name is Oliver Queen, a billionaire businessman and owner of Queen Industries, as well as a well-known celebrity in his locale of Star City. Sometimes shown dressed like Robin Hood, Green Arrow is an archer who invents trick arrows with various special functions, such as glue arrows, diversions (smoke), net, explosive, time bomb, grappling, fire extinguishing, flash, boomerang, and tear gas arrows, as well as cryonic arrows, and even a kryptonite arrow. At the time of his debut, Green Arrow functioned in many ways as an archery-themed analogue of the very popular Batman character, but the writers at DC subsequently developed him into a voice of progressivism very much distinct in character from Batman, with his own supporting cast.

mightbedragons rated this 7/10 5 months ago

OneSpiderClone rated this 8/10 2 years, 9 months ago

princesstwi added this to a list 2 years, 10 months ago
DC vs. Marvel Character Battles (50 characters items)

cudion added this to a list 3 years, 11 months ago
Characters studios properties (2018 and forward) (72 characters items)

Ghosthack rated this 8/10 4 years ago

bandofsisters rated this 7/10 4 years, 1 month ago

upgradeslinky rated this 4/10 4 years, 9 months ago

Wandad Farkhondeh rated this 7/10 5 years ago