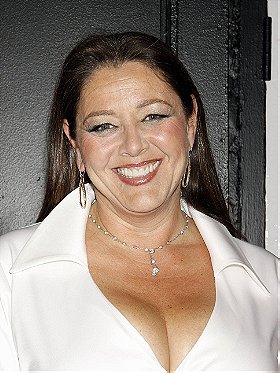 12 votes
Guests in How I Met Your Mother (128 items)
list by Agent Kermit D. Fonz
Published 10 years, 9 months ago

1 vote
View all Camryn Manheim pictures
Camryn grew up in Peoria, Illinois. Her mother, Sylvia, was a schoolteacher and her father, Jerry, was a math professor. She developed an interest in acting after working at a Renaissance Fair at age 16. She earned a Master's Degree in Fine Arts from New York University in 1987. She studied acting at the Atlantic Theater Company Acting School in Chelsea, which was founded by David Mamet and William H. Macy and teaches the technique "Practical Aesthetics," which Ms. Manheim uses. She is currently a member of the company at the Atlantic Theater, and she sometimes performs in shows during their season.
Tags: American (4), Actress (2), Feminist (2), Actor (2), The Tenth Kingdom (2), Female (2), The Practice (2), Dark Water (2), The Ghost Whisperer (2), Curvy (1), Plus Size (1), An Unfinished Life (1), Romy And Michele's High School Reunion (1), Scary Movie 3 (1), Brunette (1), Twisted (1), Happiness (1)
My tags: