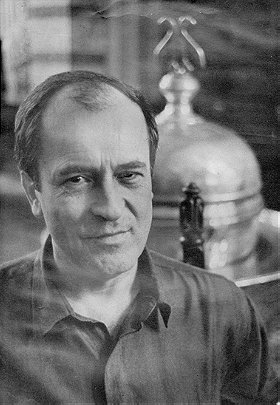 Born in Parma in 1941, Bertolucci was introduced to filmmaker Pier Paolo Pasolini and in 1961 he abandoned his studies at Rome University to work as Pasolini's assistant on Accattone. The following year, he wrote the screenplay of his own first film The Grim Reaper, which was acclaimed at the Venice Film Festival and was followed in 1964 with Before the Revolution.In 1967 Bertolucci was asked by Sergio Leone to write the storyline for Once Upon a Time in the West. In 1969 he directed The Spider's Stratagem, and then The Conformist, the latter an adaptation of the Alberto Moravia novel. In 1973 he attained enormous international, critical and commercial success with the release of the controversial Last Tango in Paris, starring Marlon Brando. In 1976 he directed the epic 1900, starring Robert De Niro and Gerard Depardieu. This was followed by Luna starring Jill Clayburgh and Tragedy of a Ridiculous Man which starred Ugo Tognazzi and Anouk Aimee. In 1985, Bertolucci directed The Last Emperor, the story of the life of Pu Yi, China's last ruler. The film won nine Academy Awards, including Best Director and Best Film, as well as numerous awards world-wide. In 1990 Bertolucci adapted Paul Bowles' novel The Sheltering Sky, filmed in the Sahara Desert with a cast including Debra Winger and John Malkovich. In 1992, Bertolucci returned to the East to film Little Buddha in Nepal and in the monasteries of the remote principality of Bhutan.

Stealing Beauty was shot during the summer of 1995 on location in the Chianti district of Tuscany, between Florence and Siena. The film marks Bernardo Bertolucci's return to filming in his native Italy for the first time in fifteen years, following the completion of his Oriental Trilogy -- The Last Emperor, The Sheltering Sky and Little Buddha, all three international films made on an epic scale and produced by Jeremy Thomas, who continues his collaboration with Bertolucci on this latest film.

While visiting friends in Tuscany, Bertolucci had the idea for a story about a young American girl, on the verge of womanhood, visiting a group of expatriates, and the effect her presence would have on such a community; a tale in the spirit of Henry James, where the girl is revealed as very strong and, at the same time, terribly vulnerable. The title refers to the beauty that is Tuscany, appropriated by the aesthetes in the community who appreciate and plunder this natural beauty to their own artistic ends. It also refers to the beauty of Lucy, the heroine, which also attracts the attention of all the members of the household. ... (more) (less)
Tags: Oscar Winner (3), Director (3), Italian (3), Born 1940 (3), Italy (2), Died 2018 (2), Italiano (2), 09 (1), Oscar Winning Director (1), Italian Male (1), 1940s Births (1), Erotic Dramas (1), Political Films (1), BAFTA Winner (1), Golden Globe Winner (1), Leftist (1), Communist (1), Actor (1), Producer (1)
My tags:

1. Once Upon a Time in the West

1. Once Upon a Time in the West

samira voted for an image 5 months, 3 weeks ago

" "With tears in my eyes, I think that in dying Marlon has become immortal. had learnt better than his peers how to feel like another person, to become a Mexican revolutionary, a Hell's Angel, a New York docker, a tree or a river. The cinema generally requires an actor to enter the skin of another. Me, on the other hand, I asked him in the film for his life as a man and an actor." "An angel as a man, a monster as an actor.""

SwtChaos added this to a list 3 years, 10 months ago

Beroofficial added this to a list 6 years, 2 months ago