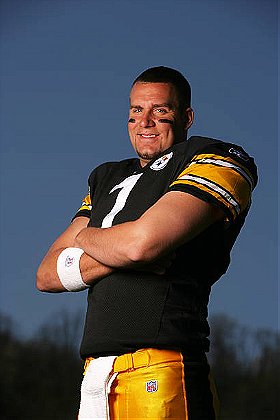 1 votes
NFL Players I'd Like To See Die In A Horror Movie (5 items)
list by slasher fan #1
Published 9 years, 1 month ago
View all Ben Roethlisberger lists

It was during the 2004 Halloween weekend that Rothelisberger officially "arrived" when Pittsburgh hosted the defending Superbowl champion New England Patriots, who had compiled an NFL-record 21 consecutive victories. This streak came crashing to a half as Rothelisberger led the Steelers to a 34-20 triumph, giving Pittsburgh the edge in the AFC. The following Sunday Rothelisberger handed the visiting Philidelphia Eagles a 27-3 pounding, the Eagles' first loss of the year and which led to the infamous Terrell Owens-Donovan McNabb sideline incident. Now Pittsburgh was listed a Superbowl contender, and opposing defenses were forced to pay far more attention to Rothelisberger than they could ever have anticipated. Big Ben began to be tested more as the 2004 season wound down, notably in a dramatic shootout with the Eli Manning-led New York Giants, but Rothelisberger continued to triumph, and led the Steelers to a spectacular 15-1 2004 season.

Entering the playoffs, however, Rothelisberger was now a target of opposing defensive schemes, and facing the New York Jets Rothelisberger committed several ill-fated plays, notably a pair of 4th-quarter interceptions. But two botched New York Jet field goal tries allowed Rothelisberger to lead the Steelers to a field goal triumph, and left Big Ben with a 16-0 record as a starter. His winning streak, however, came to an end in the AFC Championship Game to the revenge-minded New England Patriots, who picked off Rothelisberger three times; a 2nd-quarter pick was returned by Rodney Harison for a back-breaking touchdown. Rothelisberger threw two touchdown passes but could not overcome the Superbowl-bound Patriots in a 41-27 drilling of the Steelers.

It was his first career loss as a pro, and his second loss would come some nine months later in a suspenseful 23-20 loss to the Patriots. He would bounce back, leading the Steelers to a 11-5 record in 2005. As a wild card, the Steelers went on to defeat the division champion Cincinatti Bengals, heavily-favored Indianapolis Colts, and the re-energized Denver Broncos to earn a berth in Super Bowl XL against the Seattle Seahawks.

Although he struggled in the Super Bowl, Ben was able to do just enough to help the Steelers to their first NFL championship since the 1979 season. At age 23, he became the youngest quarterback to lead his team to a Super Bowl win.

Diabolik added this to a list 3 years, 7 months ago
Greatest Quarterbacks of All-Time (30 person items)