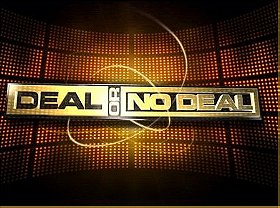 View all Deal or No Deal lists

View all Deal or No Deal pictures (3 more)

fullfathom added this to a list 8 months, 2 weeks ago

" Madi has been on NBC's "Deal or No Deal" since 2018. As you can see, she is Briefcase Model #15. What does being a “Deal or No Deal” briefcase model mean to you? Being one of the “Deal or No Deal” models is an honor. We have such a uniquely diverse group of amazing, strong women that all bring something different to the table. To be a part of this group means I will have a platform to positively impact others around me and serve as a role model for young women."

omnivorousrex added this to a list 1 year, 8 months ago

"For a time there, everyone watched Deal or No Deal, the game show on NBC hosted by Howie Mandel, in which contestants play the odds in order to win money. The show was known for its attractive “briefcase girls” (read: women holding briefcases with dollar amounts on them, who literally just stand in the background the whole time).So, guess who spent four episodes holding cases? This was Markle’s first time appearing in more than one episode of a series."