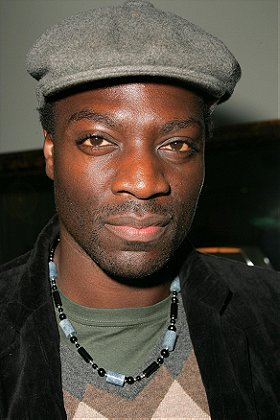 101 votes
Most Difficult Names To Spell And/Or Pronounce (19 items)
list by The Cinephile
Published 13 years, 1 month ago

Adewale Akinnuoye-Agbaje has been seen on episodes of New York Undercover and Red Shoe Diaries, before he had his big break in film. After playing the character Kahega in Congo, he was given a role in Jim Carrey’s Ace Ventura: When Nature Calls in 1995. His first stint on camera was actually in Dawn Penn’s video for the song “No, No, No (You Don't Love me)”, allowing him to expand his career. From 1997 to 2000, he rose to fame playing the criminal Simon Adebisi on the HBO series Oz. He followed this up with an appearance on the film The Mummy Returns in 2001, playing Lock-Nah alongside Brendan Fraser, Rachel Weisz, Dwayne Johnson and John Hannah.

Adewale Akinnuoye-Agbaje soon got a part in the comedy Lip Service, soon earning mainstream popularity for his performance opposite Matt Damon in The Bourne Identity. In 2004, he was cast in the action film Unstoppable, starring Wesley Snipes. He was subsequently given a role in 2005’s The Mistress of Spices and became famous for playing Mr. Eko on the ABC sci-fi series Lost. He was also the star of the musical drama On the One, but it failed to set his career on a roll.

Nusch added this to a list 1 year, 6 months ago

"Akinnuoye-Agbaje is a Buddhist, a member of Sōka Gakkai International."

darthjoker12 added this to a list 2 years, 3 months ago

lalabellexoxo added this to a list 4 years, 3 months ago
Babes Of Marvel (78 person items)

lalabellexoxo added this to a list 5 years, 3 months ago

"As Mufasa from The Lion King."

darthjoker12 added this to a list 5 years, 9 months ago

diabolical dr voodoo added this to a list 5 years, 10 months ago
The People on the MCU (175 person items)

diabolical dr voodoo added this to a list 6 years, 1 month ago

The People on the DC Cinematic Universe (52 person items)