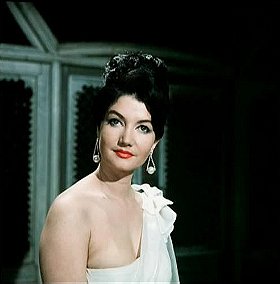 76 votes
Tribute to Glamorous Actresses of the Yesterday (257 items)
list by xolmis
Published 6 years, 5 months ago

She attended St Mary's, Ascot and trained at the Royal Academy of Dramatic Art (RADA). She worked with Ensa (the Entertainments National Service Association) during the Second World War.

Marshall's film career began with a small role in Caesar and Cleopatra (1945), with Claude Rains and Vivien Leigh. Her exotic looks resulted in her being cast in "ethnic" roles, such as Asian women, including her role as the Chinese character Miss Taro, in the first James Bond film, Dr. No (1962).

Marshall appeared in Those Magnificent Men in Their Flying Machines (1965) as the Countess Ponticelli. Her last film credit in 1971. She also made numerous television appearances.

2. Those Magnificent Men in Their Flying Machines (1965)

1. Those Magnificent Men in Their Flying Machines (1965)

2. The Incredible World of James Bond

Stehako added this to a list 3 years, 1 month ago

perod voted for an image 3 years, 9 months ago

powerking14 voted for an image 3 years, 9 months ago

Mass. Patriot added this to a list 3 years, 11 months ago

Mass. Patriot posted a comment on this image 4 years ago

chance voted for an image 5 years, 4 months ago

xolmis added this to a list 6 years, 5 months ago
Tribute to Glamorous Actresses of the Yesterday (257 person items)