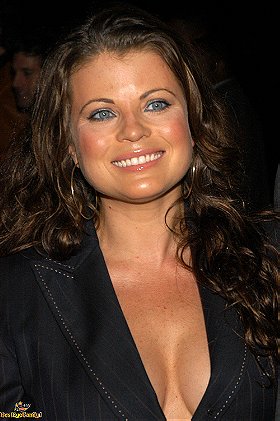 At 12, Yasmine landed a role in the feature film Hey Babe! starring, opposite Buddy Hackett. Thus began her career in acting.

Yasmine attended the United Nations International School in New York whilst juggling both a modeling and acting career. Already well experienced in the acting field, Yasmine began acting in the soap opera Ryan's Hope by 16 years old. Her role lasted for 4 years before she moved on to yet another soap, One Life To Live.

Yasmine, however, is probably most famous for her well-known role as Caroline Holden in the popular worldwide television program Baywatch, which began in 1994. During her 3-year run on the bikini-clad show, People magazine voted her one of 1995's 50 Most Beautiful People.

Her stint on Baywatch helped Yasmine land some made-for-TV movies including A Face To Die For (1996), Crowned and Dangerous (1997), and The Lake (1998). 1998 was also the year that Yasmine got her big screen debut in the movie BASEketball, alongside Jenny McCarthy. Unfortunately, this film did not generate any monumental appeal for the actress. She eventually did more movies including Coming Soon, Heaven or Vegas, and Ultimate Deception (all in 1999), but again, none of these movies managed to make Yasmine a full-fledged movie star.

Luckily, while she was doing all these forgettable movies, Yasmine began starring opposite Don Johnson in the CBS hit show Nash Bridges, and remained on the show for 2 years.

In 2000, Yasmine left Nash and moved on to becomes vixen Heather Lane Williams in Aaron Spelling's nighttime soap opera Titans. Unfortunately the show was canceled after only a few episodes.

In 2001, Yasmine's life took an unfortunate turn as she ended up crashing her car into a median on a Michigan road. Shortly after police arrived, she was arrested for drug possession, as cocaine was found in her purse. After she spent the night in jail, she plea bargained and was sentenced to 2 years probation and 100 hours of community service.

In 2003, Yasmine hooked up with the Baywatch gang again for the made-for-TV movie, Baywatch: Hawaiian Wedding.

yoda voted for an image 4 hours, 28 minutes ago

lovedriver voted for an image 4 days, 10 hours ago

Crazytone18 voted for an image 4 days, 13 hours ago

tailic12 voted for an image 3 weeks, 2 days ago

tijtij voted for an image 4 weeks ago

roadkill41 voted for an image 1 month, 1 week ago

unclebuck77 voted for an image 1 month, 2 weeks ago

nitevision voted for an image 2 months, 2 weeks ago

raizen717 voted for an image 2 months, 3 weeks ago

tijtij voted for an image 7 months ago

David Roffidal voted for an image 8 months, 1 week ago

Look Left voted for an image 9 months, 1 week ago

looksharp voted for 5 images 12 months ago