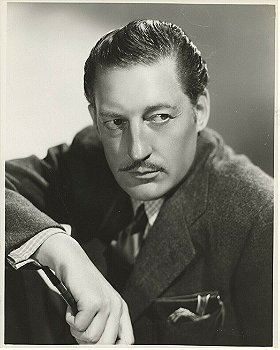 He made his Broadway debut as William Warren in the H.G. Wells play "The Wonderful Visit" in 1924. While appearing in 17 more plays on Broadway from 1924 to 1930, he also managed to appear in three silent pictures under his own name, Warren Krech. His only substantial role was in his first flicker, Fox's The Town That Forgot God (1922). In 1923, he played a credited bit part in support of "Perils of Pauline" star Pearl White in her last serial photoplay, Plunder (1923) but he went uncredited in a bit part in the Roaring Twenties/John Gilbert-as-bootlegger movie, Twelve Miles Out (1927).

Possessed of a first-rate speaking voice, rich, deep, and mellifluous, he was a natural for the talkies, and in 1931, he joined the stock company at Warner Bros., the studio that gave the world cinema sound. Projecting a patrician persona, Warren William initially thrived in the all-talking pictures. He appeared in a lead role in his first talkie, Honor of the Family (1931), an adaptation Honoré de Balzac's novel "Cousin Pons." Subsequently, he appeared as second leads and leads in support of the likes of Dolores Costello (Drew Barrymore's grandmother), H.B. Warner, Walter Huston, and Marian Marsh, before headlining The Mouthpiece (1932) as a district attorney who quits for the other side of the law, defending mobsters before a last reel conversion. It was his break-through role, followed up by a turn as a crooked campaign manager with more than just the affairs of state on his mind in The Dark Horse (1932). He then moved on to leading roles in A-list pictures, including the high-suds soap opera Three on a Match (1932), the classic musical Gold Diggers of 1933 (1933), Frank Capra's Lady for a Day (1933), and the original Imitation of Life (1934) starring Claudette Colbert and Louise Beavers.

William's outstanding performances in these roles include Skyscraper Souls (1932), The Match King (1932), and Employees' Entrance (1933). He also broadened his range to play the fraudulent clairvoyant in The Mind Reader (1933).

With his patrician looks and bearing, William was loaned out to Cecil B. DeMille to play the patrician's patrician, Julius Caesar, again opposite of Ms. Colbert in Cleopatra (1934), a typical prodigal DeMille production in which Henry Wilcoxon avenged his mentor's assassination by rousing the rabble. William went on as the second Sam Spade (renamed Ted Shayne) in the "Maltese Falcon" remake Satan Met a Lady (1936) with Bette Davis. He eventually found himself in B-films. The same year he played Caesar, he made his inaugural and terminal appearance as William Powell's premier replacement in the role of Philo Vance in The Dragon Murder Case (1934), a character he would resurrect five years later in The Gracie Allen Murder Case (1939).

After making his first appearance as the cinema sleuth Vance, William returned to his roots as a court-room advocate, cast as the first Perry Mason in The Case of the Howling Dog (1934). After four films, he was replaced as Erle Stanley Gardner's A-#1 attorney in 1936 by former silent screen heart-throb Ricardo Cortez, the man who had first played Sam Spade, in the original The Maltese Falcon (1931). Before leaving the studio, William appeared in one more picture under contract at Warners Bros., the A-list Stage Struck (1936); then the erstwhile Warners trouper trooped over to Metro-Goldwyn-Mayer for a few years, to work as a character actor.

Another movie series beckoned and William appeared as Michael Lanyard's "The Lone Wolf," in nine movies made by Columbia from 1939 to 1943 beginning with The Lone Wolf Spy Hunt (1939). Of the ten actors who appeared as "The Lone Wolf" in the 30 years the series ran, off and on, from 1919 until 1949, he made twice as many films as his nearest competitor (which included such top stars as Thomas Meighan and Melvyn Douglas). William continued to act in character parts calling for a patrician presence until his premature death in 1948.

Personally, Warren William was a shy and retiring type. Speaking of him, five-time Warners co-star Joan Blondell said that William "was an old man even when he was a young man." According to San Francisco critic Mick LaSalle's 2002 book "Dangerous Men: Pre-Code Hollywood and the Birth of the Modern Man" (New York: St. Martin's Press, 2002), William, who quite unlike his early Warner Bros.' stereotype as a heartless "love 'em and leave 'em"-style seducer, remained married to one woman throughout his adult life. He was an active inventor with multiple patents, designing one of the first recreational vehicles, reportedly so he could continue to sleep while being driven to the studio in the morning.