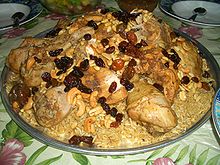 
Kabsa is a family of mixed rice dishes that are served mostly in Saudi Arabia — where it is commonly regarded as a national dish. Kabsa, though, is believed to be indigenous to Yemen. In places like Qatar, the United Arab Emirates, Bahrain, Iraq and Kuwait the dish is popularly known as machbūs, but is served mostly in the same way.