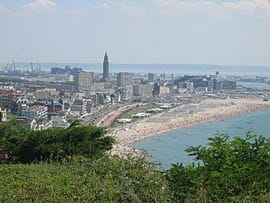 Le Havre (French pronunciation: ​[lə ɑvʁ]) is an urban French commune and city in the Seine-Maritime department in the Haute-Normandie region of north-western France. It is situated on the right bank of the estuary of the river Seine on the Channel south-west of the Pays de Caux.

Its port is the second largest in France, after that of Marseille, for total traffic, and the largest French container port. The name Le Havre means "the harbour" or "the port".

Administratively the commune is located in the Haute-Normandie region and, with Dieppe, is one of the two sub-prefectures of the Seine-Maritime department. Le Havre is the capital of the canton and since 1974 has been the see of the diocese of Le Havre.

Le Havre is the most populous commune in the Haute-Normandie region, although the total population of the greater Le Havre conurbation is smaller than that of Rouen. It is also the second largest subprefecture in France (after Reims).

The city and port were officially founded by King François I in 1517. Economic development in the Early modern period was hampered by religious wars, conflicts with the English, epidemics, and storms. It was from the end of the 18th century that Le Havre started growing and the port took off first with the slave trade then other international trade. After the 1944 bombings the workshop of Auguste Perret began to rebuild the city in concrete. The oil, chemical, and automotive industries were dynamic during the Trente Glorieuses (postwar boom) but the 1970s marked the end of the golden age of ocean liners and the beginning of the economic crisis: the population declined, unemployment increased and remains at a high level today. Changes in years 1990–2000 were numerous. The right won the municipal elections and committed the city to the path of reconversion, seeking to develop the service sector and new industries (Aeronautics, Wind turbines). the Port 2000 project increased the container capacity to compete with ports of northern Europe, transformed the southern districts of the city, and ocean liners returned. In 2005 UNESCO inscribed the central city of Le Havre as a World Heritage Site. The André Malraux Modern Art Museum is the second of France for the number of impressionist paintings.