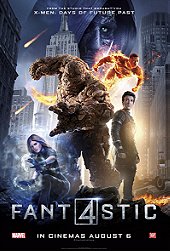 Initial Thought: So I was actually pretty intent on watching this when it was announced. I was hopeful for it. Then the first trailer came out and it looked like it would be fine and take on a darker tone than the previous two films. Then another trailer came that had issues I was skeptical about. Now that it's out I hear pretty much constant negativity. So I decided to see for myself if it really is just an awful film or something else.

Characters/Acting: I for one was totally on board with Michael B. Jordan as Human Torch. I figured he could pull off the personality and be wicked awesome. Plus I like the whole mixed family vibe especially since mine is growing into one such family. Miles Teller is a good actor, but he does seem a bit too frat boy to be a Reed Richards type. Kate Mara is okay, but I think they could have casted many better choices. Jamie Bell as the human Ben Grimm is a fine. What isn't fine is having him also be the voice of The Thing. I don't want to hear him sounding like a young guy trapped in a large creature. It just seemed so wrong that they did that. The Doctor Doom here while played by a fairly good actor doesn't feel like him. I mean they even state in trivia that he is a mixture of a few villains. That is a big no-no! Doctor Doom should only ever be Doctor Doom or you ruin this amazing villain. The chemistry as well as the acting between the characters felt a bit awkward. They tried to add effects to make Ben Grimm sound a little bit more gruff, but it still just didn't work for me. Even his catchphrase made me groan. Doctor Doom looks absolutely dreadful.

Story: Four young outsiders teleport to an alternate and dangerous universe which alters their physical form in shocking ways. The four must learn to harness their new abilities and work together to save Earth from a former friend turned enemy. So as we know it's yet again the origin story we all know by now. They really took the cake at making the origin story here last as long as possible. It takes pretty much half the movie until they finally get their powers. I thought that the scene where it happened was where it finally gave something interesting. Otherwise the first half felt pretty much like Stargate. There are some elements to this that are good, but it doesn't quite make up for the mediocrity of it as a whole. The Doom hallway scene was probably the coolest thing here and it didn't feel right in this movie. The fight at the end just felt like it was added to remind you that this is a comic book movie.

Directing/Writing: I absolutely loved Chronicle. So I was hoping that Josh Trank would end up making this good as well. Apparently this isn't the actual version Josh Trank wanted to make. It is either true or he is just trying to make himself look good. He probably knew this film was not going to do well at all. Simon Kinberg is a 50/50 writer. Sometimes his films are awesome and sometimes I wish they hadn't been made. I have only seen Lazarus Effect by Jeremy Slater and it was pretty average at best. I'm really hoping there are some things they do right here. It can't be that pathetic. Well I was wrong it really can be pretty pathetic. If there is a better version from Josh Trank I wish we could have gotten that.

Final Thought: This movie really wasn't all that long, but they stretched the origin far too much. Barely anything happens through the whole movie. This has to be definitely one of the most boring and disappointing Marvel films I have seen. At least in quite awhile. Fox really just needs to give up on this team. They haven't made an enjoyable version yet. At least the casting from the previous films were more on point. Did they really think this was going to earn sequels? It's such a shame when this could have had potential. It wasn't worth watching. I couldn't recommend it even if you are unfamiliar with the comics.