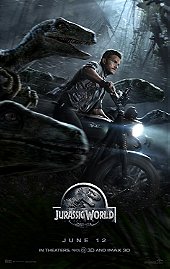 "She will kill anything that moves. She is finding where she fits in the food chain, and I don't think you want her to figure that out!"

Fourteen years of rumours, false starts and cancelled release dates have finally culminated with 2015's Jurassic World, a grandiose blockbuster that's confidently worthy of Steven Spielberg's groundbreaking Jurassic Park. With dinosaurs now mostly relegated to cheap straight-to-video releases like The Dinosaur Project and Jurassic Attack, it's refreshing to finally behold a major motion picture with the funds to do it properly. With Spielberg again adopting a producing role, the directorial duties fell to Colin Trevorrow here, whose last moviemaking endeavour was the 2012 indie effort Safety Not Guaranteed. Trevorrow acquits himself admirably with a movie of this scope and budget, celebrating this revered cinematic universe to create an immersive dino thriller which plays out like a natural extension of the 1993 game-changer. Delicately ignoring the last two sequels, Jurassic World stays true to the elements which made Jurassic Park such a hit in the first place - honest-to-goodness tension, smarts to supplement the spectacle, terrifying dinosaurs, and a charming cast of characters. 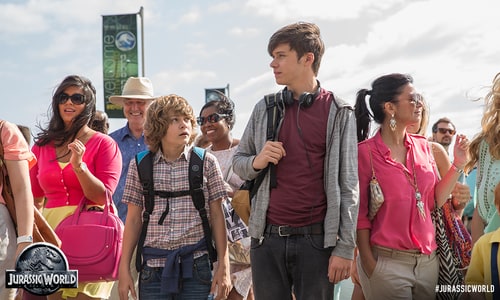 Set over twenty years after the catastrophe at the original Jurassic Park, billionaire entrepreneur Simon Masrani (Irrfan Khan) has turned John Hammond's vision into a reality with Jurassic World, a fully-functional dinosaur theme park built on Isla Nublar. Managing the park is the career-minded Claire (Bryce Dallas Howard), who maintains a timid working relationship with former Navy serviceman Owen (Chris Pratt), a passionate dino expert who cares for the park's Velociraptors by serving as their alpha. When Claire's two young nephews Gray (Ty Simpkins) and Zach (Nick Robinson) come for a visit, the diligent operations manager has no time for her family, leaving them to be babysat by her assistant. To boost park attendance, Jurassic World's scientists have designed a genetically modified hybrid, the Indominus Rex. Owen immediately realises the danger it poses, but his warnings come too late, with the monster soon escaping its pen and beginning a park-wide rampage. Complicating matters is Vic (Vincent D'Onofrio), the head of InGen Security, who's determined to weaponise the prehistoric animals.

2001's Jurassic Park III jettisoned all semblance of intelligence; it was a straight-ahead B-movie which forgot that the original Jurassic Park was bolstered by moralistic and scientific discussions. Jurassic World finds intelligent underpinnings by introducing the idea of advanced gene splicing and providing satire regarding abuses of power and corporate excess, not to mention it plants the seed of using dinos as weapons that may be exploited in future sequels. And while the basic story is similar to the almighty blockbuster which spawned it, Trevorrow is able to introduce enough innovation to make Jurassic World feel fresh and original. Above all, however, there is an underlying sense of self-awareness: this is ultimately a more pumped-up version of the 1993 movie, and the flashy set-pieces are situated within a story concerned with the ugly business of turning miracles into marketing opportunities. Driving this point home even further is the presence of a tech support engineer (Jake Johnson) who wears a vintage "Jurassic Park" t-shirt, keeps little toy dinosaurs at his work station, and has strong opinions on how legit Hammond's original park was compared to the more oversaturated version currently in existence. For crying out loud, the I-Rex's full title is "Verizon Wireless Presents the Indominus Rex." (Also, iRex. Get it?) There are other little winks here too, including an amusing middle finger to Jurassic Park III that fans will appreciate. 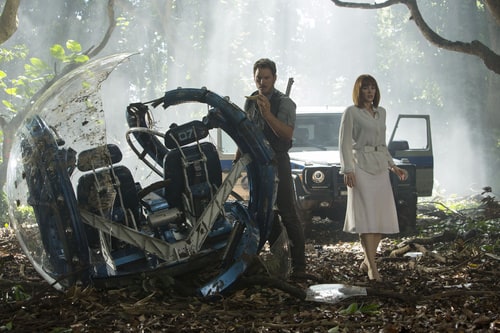 Jurassic World's script - which was originally written by Rick Jaffa and Amanda Silver, before being revamped by Derek Connolly and director Trevorrow - appreciates the value of build-up. In the original film, it took about an hour for the dinosaur rampaging to begin, and Trevorrow elects a similar approach here, letting us get acquainted with the ensemble and become properly invested in the film before all hell breaks loose. There's a lot of plot jammed into the two-hour runtime - of particular note is the reintroduction of InGen, with Hammond's former company once again up to no good. It might not seem necessary, but InGen has been up to such tricks since The Lost World, and the first movie involved the conspiracy with Dennis Nedry who was ultimately responsible for the catastrophe. Trevorrow's Safety Not Guaranteed was character-based, and he thankfully does a fine job of juggling focus here. Although not everything works (Vic's villainy is overplayed by D'Onofrio), momentum is always maintained, and there's humour here which helps to humanise the characters.

What's surprising is how well Trevorrow handles the elements that have been the basis of internet scrutiny for months - the raptors are not tamed or friendly; rather, Owen imprinted on them at birth, and they remain extremely dangerous creatures. In lesser hands, this whole aspect would have fallen flat, but it's handled with tact and never strains credulity, plus Owen's relationship with the raptors gives the movie a bit of extra heart and introduces a fresh new angle. Furthermore, it was ultimately a sublime idea for Jurassic World to change things up by showing us a fully-functional dino theme park. It's stunningly conceived by Trevorrow and his crew, coming alive in a genuinely amazing way. The environment is immersive and detailed, not to mention it feels surprisingly plausible, with petting zoos, shops, rides, shows, hotel resorts and even an underwater observation deck, all of which are implemented through lavish production design. It really is Hammond's vision come to life, and it's admirable that the movie relies on vast sets and real locations as opposed to pure CGI. One does have to wonder why there isn't some sort of bunker in the park as a contingency plan in the event of an emergency, however.

Although scientists are now certain that dinosaurs had feathers, the Jurassic Park series has never been concerned with providing the most scientifically accurate dinos - the geneticists in this franchise have always modified dinosaur genomes to create, as Alan Grant describes them, “Genetically engineered theme park monsters.” Dr. Wu (B.D. Wong) even talks about this, pointing out that none of the dino DNA is 100% pure. The promotional materials fail to do justice to the incredible dinosaur special effects, which are insanely detailed and competent. Witnessing Jurassic World on the big screen is sensational, with the choice to shoot on good old-fashioned celluloid (both 35mm and 65mm) bestowing the production with a realistic look. Most modern blockbusters are digital all the way through to their core, with features like the Hobbit trilogy looking too smooth, which makes the CGI look like CGI. But Jurassic World carries a fine grain structure, and at times the digital effects look like practical animatronics (there are a few animatronic shots here and there, but there aren't used in the same capacity as the previous movies). The trailers foreground the big money shots, but Trevorrow does wisely by not giving into excess.

The Jurassic Park franchise has always been dark, and Trevorrow thankfully doesn't soften the edges. The Indominus Rex is established as a major threat, and characters are killed and eaten in surprisingly violent ways. There is a vast body count here, and nobody is safe, with the dinos even descending upon the park guests. Furthermore, there is genuine thought and intelligence to the dinosaur behaviour. The enterprise ultimately comes to a head for a climax that surpasses all expectations - it managed to both keep me on the edge of my seat and make me weep in utter delight at the sheer magnificence of it. Of course, the climactic showdown amounts to pure fan service, and it is pretty silly, but it's pulled off with such honest-to-goodness gusto and sincerity that it just plain works. Furthermore, Michael Giacchino's score is ideal, blending John Williams' unforgettable original themes with some rousing new music.

With Guardians of the Galaxy and now Jurassic World, Pratt has created two distinct, amiable heroes that kids are going to want to dress up and play as. Owen carries no traces of Star Lord - whereas Pratt's Guardians of the Galaxy character was a buffoon, Owen is a smart, resourceful ex-military type with boyish charm and a sense of humour. He's an old-school hero who talks a lot of sense, and Pratt nails the role beautifully. Howard is not quite as instantly lovable, though that's more by design - she's believable her role, and that's what matters. Jurassic World has heart to boot, with Simpkins and Robinson delivering sincere performance and coming off wholly believable as siblings. The relationship the boys share is different to Tim and Lex from the first movie, and anyone with a brother can relate to their interactions. The family dynamic between the boys, their aunt, and their mother (Judy Greer) is unexpectedly effective, giving the film some unexpected poignancy. The only familiar face here is Wong as Dr. Wu, Jurassic World's lead geneticist.

There are not many directions that a Jurassic Park sequel can take, as most avenues have been exhausted. Another rehash of The Lost World would feel slipshod, and anything too far removed from the franchise would feel jarring. Fortunately, director Trevorrow has knocked it out of the park, creating an enormously entertaining blockbuster full of majesty and excitement which also leaves room for further follow-ups. There's humanity underneath the spectacle, the production values are top-flight, there are plenty of competent chills and thrills, and Trevorrow is a skilled cinematic craftsman. It is silly, but it's not an insult to anyone's intelligence. For those of us who grew up with Spielberg's iconic blockbusters (this reviewer included), Jurassic World is a godsend. And it will no doubt impress a brand new generation of kids, too. It does not quite nail the balance of sophistication and blockbuster thrills that was accomplished for Spielberg's film, but nothing could.