Review of Children of Men 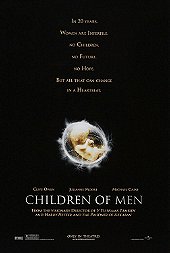 While rather keeping the bludgeons tighter on the bid on the moving adrenaline picture flow one, instead of on elaborately woven plots and story telling... though, or just hence, an unshirkably touching depiction of a not to far reached-for future, in the matters of, as.. how, we come to, as so mellifluously all-aware, ripping fleet-footedly, eyes-wide-open the world apart, by just fondling the density of our penises in our trouser bottoms, strangling our vis-à-vis' on the razor blades of our aching swoons in situations on the edge, instead of bringing all and sundry and in coherence the shit together, that really counts and we long since refuse to lay our eyelashes on without flutter and sanies..
Plus, sueffig mature Implantat of Hollywood pathos in the valuation of humankind, cultural achievements, fair portrayal where hope gots its umbilical cord, and the (yet wonderfully) proximate imposition of the urge to instantaneously laying down to make children.

And: The only feature I ever came over, that resorted to a King Crimson song. :p