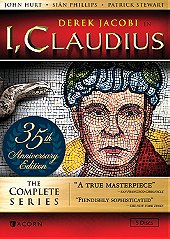 Watching I, Claudius today...Initially feels a little dated. Initially. Give it five minutes and you are totally sucked in.

Some amazing performances are given by Brian Blessed and Derek Jacobi...However I really believe that John Hurt's portrayal of Gaius Caligula is one of the greatest examples of character acting in the last century. Caligula, an already facinating figure is perfected by Hurt, portrayed as both a bloody tyrant and a lovable rogue. It's just a joy to watch.

Although some of Robert Grave's narrative is changed, it remains the same in essentials. A definite for any intelligent person who can maintain focus even without the presence of breasts or Adam Sandler (although the two are arguably the same). Plus a great story for anyone who cannot be bothered to read the book