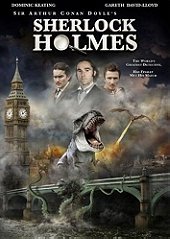 I hated Transmorphers, I hated Sunday School Musical, I hated Mega Shark vs. Giant Octopus, and don't get me started on those 2012 films that Roland Emmerich didn't do. So is it a surprise that this is actually their most entertaining film yet? I guess it is! Sure, Sherlock Holmes fighting dinosaurs and a huge mechanical dragon is the stupidest idea ever, as they have been used a lot by The Asylum, but this has done to The Asylum's filmography what Rampage did to Uwe Boll's.

Yes, I thought the movie so many people have been confusing the Guy Ritchie film over on Rotten Tomatoes was a guilty pleasure. I expected it to suck, but after reading some positive reviews, I decided to watch it for fun, and boy, did I get fun! The effects are a surprising improvement over The Asylum's other films, and just when you think this is all just another rip-off, The Asylum do something clever. Holmes fights against the villain, who is in a suit made of iron. It has a face which resembles an angry-looking person, and a can of air at the back. This movie has paid homage to Iron Man!

You might give me thumbs down for liking an Asylum film, but I'm not the only one. This surprised my expectations as much as the reviews for The Karate Kid remake. Trust me on this one (or don't), it's not as good as the Guy Ritchie film, but it's campy, stupid, and as a fun experience as tripping balls. If you like The Asylum (I hate it), or some silly, unoriginal fun (which can be a problem), you just might enjoy this! Seriously though, you might.

Favorite Images of Lizards #2 by kathy

Mars in movies by Venice

The Evolution of Beren Saat by xolmis

Movies set in the 1930s by Anautix