A world of used cars and singles bars... 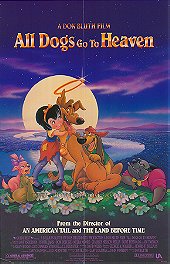 This is one of my absolute favorite films from my childhood. I don't know why, but I adored it as a kid and, oddly, wasn't remotely scared by it. Set in 1930's New Orleans, All Dogs is, basically, about heaven and hell, and the repercussions of our actions. Seems rather dark for a "kid's film" but that's really because people mistake animation as "for kids" instead of for people and because people assume all media for kids should be candy-colored castrated tales.

The lead is Charlie, a selfish, greedy, gambling mutt high on life after he escapes from "death row" (I don't know if that's the same as human death row or simply what dogs would call a pound). His return does not please his former business partner, Carface, who has him bumped off. Charlie arrives in the afterlife where dogs get sent to heaven by rote because "unlike people, dogs are naturally good, loyal, and kind". Looking his gift horse in the mouth and not being content to stay in boring old heaven, Charlie breaks out despite warnings that "you can never come back". Now basically undead, Charlie sets out to get revenge on his killer, becoming side-tracked by a little girl named Anne-Marie. The rest you'll have to watch to find out.

It is a dark movie and its difficult to appreciate if you didn't grow up with it. Were it to come out now I'd take one look at the title and boggle at how a movie with such a subject could be made for kids. It is much better than it sounds and really not as dark and scary as you'd think. The death of animals is a heavy subject though and still gets me to this day. The subjects and heaven and hell aren't heavy handed and it does't feel pontificated or overly religious which I consider a plus but I could see it annoying some people. It's not a perfect movie, but it is a good movie and certainly worth watching.

To note, the presence of the sequels really sullies the integrity and message of this first film and I highly recommend avoiding the sequel and the TV series.