Review of That's My Boy 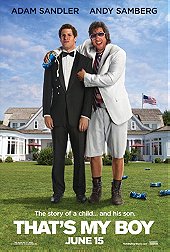 How do you follow up the piece of trash called Jack & Jill? Sink even lower that it will flop critically and commercially.

A teenage boy had sex with a high school teacher which sends her to prison. Years later he tries to make up for lost time trying to be a father the worst way possible.

Adam Sandler is so hateful, right down to his voice. He's essentially the same character from Big Daddy (another terrible Sandler comedy), overdosed on mean spirituality. Andy Samberg is trapped in a comedy so painful, he's trying to escape movie, so he spent his paycheck on psychological help. Other actors suffer the same fate as Samberg including James Caan and Susan Surandon.

Thankfully this is huge flop at the box office and earned Sandler his third Worst Actor Razzie and won Worst Screenplay. Nobody should see this 115 minutes of torture. even if they're fans of Sandler.