The best summer blockbuster in history... 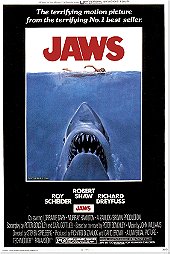 "You're gonna need a bigger boat."

Though decades have passed since it first entered theatres in 1975, Steven Spielberg's Jaws still assuredly holds its position as one of the greatest thrillers of all time, and remains an important cinematic artefact. Central to the film's brilliance is the riveting suspense, the colourful cast of characters, the humour, the terrific dialogue, the unforgettable score, the thrills, and, above all, the way it taps into the most primal of human fears: fear of the unknown. It was also a motion picture that changed Hollywood. The first film to gross over $100 million in domestic ticket sales, Jaws was seen (and seen again) by more than 70 million viewers throughout the season of its theatrical release, and its success inspired the Hollywood trend of summer blockbusters. Additionally, the film catapulted director Steven Spielberg out of relative obscurity and onto the A-list. Even today, fascination with Jaws is on a par with Alfred Hitchcock's Psycho, and it never seems to age. 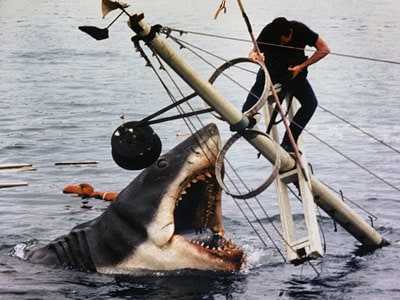 Upon agreeing to the task of helming Jaws, Spielberg (fresh off The Sugarland Express and Duel) was perhaps blissfully unaware of the challenges that awaited him during the task of adapting Peter Benchley's best-selling novel for the big screen. As he himself stated during interviews in subsequent decades, he was "young and fearless - or perhaps dumb." A pending Screen Actors Guild strike delayed filming, the main location (Martha's Vineyard) was not known for its cooperative weather, squabbles with Benchley broke out (who objected to changes Spielberg wished to make to the story), and there were troubles with the constantly-malfunctioning mechanical sharks (all of which were nicknamed Bruce, after Spielberg's lawyer). Days would pass when not a single shot could be lensed, either due to troubles with the sharks or trouble with the weather. It's a miracle the film ever reached theatres at all. Yet Spielberg eventually finished the movie, and the result is an engrossing, edge-of-your-seat thriller.

The protagonist of Jaws is Martin Brody (Roy Scheider); the police chief of the small island resort community of Amity. On the week before the fourth of July, a 25-foot Great White Shark chooses the tranquil Amity as its private feeding grounds. While Martin is determined to close the beaches and protect the public, the devious mayor (Murray Hamilton) is in favour of a cover-up to protect the town's reputation as a popular summer holiday destination. However, after further attacks, the mayor begrudgingly accepts that the beaches are being terrorised by a monster shark. A grizzled old sea-dog named Quint (Robert Shaw) is hired to take care of the problem, and is accompanied by Martin and shark expert Matt Hooper (Richard Dreyfuss) in his hunt for the shark. 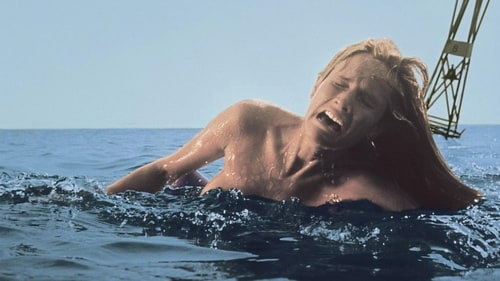 For about 80 minutes of its runtime, Jaws is an exercise in elevating tension. During this period, Spielberg heavily favoured the "shark's eye view", which is complemented with John Williams' chilling score. The suspense generated through this technique is almost unbearable. Like master filmmaker Alfred Hitchcock once said, "There is no terror in the bang - only in the anticipation of it". While Spielberg does present a strong case for Hitchcock's words, he additionally manages to belie them. See, for the first half of the movie, musical interludes are generally an indicator that a shock is near, but once the shark is finally seen with no musical interlude and no build-up, it's a terrifying shock. Not revealing the shark's appearance until past the midpoint is a stroke of genius. Interestingly, this was not by design but by accident - the mechanical sharks were not working properly and could only be used for a limited amount of scenes, and the shark isn't seen during the first half of the film because of this. As it turns out, the nightmare of the malfunctioning mechanical sharks was a blessing in disguise - not only was Spielberg forced to rely more on creative photography, but also more on pacing, characterisation and editing. While the shark does admittedly look phoney at times, it still looks real enough. At no point does the shark look so fake it takes us out of the scene, which is a testament to Spielberg's masterful directorial touch.

Another beneficial decision was to use genuine footage of Great White Sharks, which was filmed by the husband and wife duo of Ron and Valerie Taylor. Meanwhile, the film's crowning touch was supplied by John Williams: the score. Williams has been involved in virtually every Spielberg film since The Sugarland Express, and for Jaws he provided a rousing, tense score which flawlessly underlines the proceedings. The music is not Williams' best work, but the shark theme is one of the most recognisable cues in film history. In fact, the signature tune has become as famous as Bernard Herrmann's music for the shower scene in Psycho. One can hardly think Jaws without thinking about the music, which has been parodied enough times to make it a legitimate part of our cultural heritage. 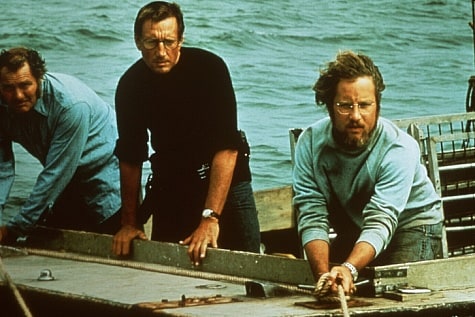 The real star of Jaws is the shark, and, for that reason, Spielberg was under no pressure to sign a big name actor for the lead role. Instead, he had the freedom to go with someone who suited the role. Playing Martin Brody, Roy Scheider conveys a sense of tremendous humanity, and it's easy to sympathise with the character since he seems so natural. Meanwhile, shark expert Matt Hooper was portrayed by Richard Dreyfuss, who effortlessly conveyed charm, energy and dry wit.
Robert Shaw as Quint was a remarkable piece of casting. There's a scene that occurs late into the movie in which Matt, Quint and Brody are comparing scars, and Quint is drawn into telling the tale of his experiences aboard the U.S.S. Indianapolis; a Navy ship sunk by the Japanese during World War II. Shaw's performance is hair-raising as he tells the story of floating in the water for more than a week with over a thousand men while sharks slowly devoured them. Shaw managed to deliver the speech in one long take, and it's the most riveting instance of acting in the entire film. 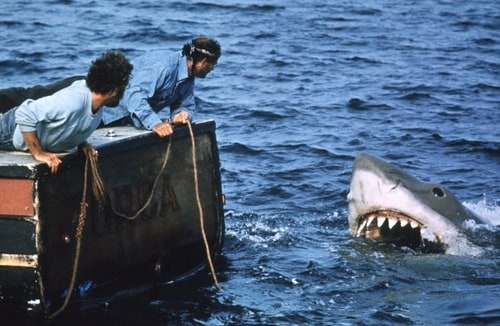 The phenomenal success of Jaws (which grossed over $400 million worldwide from an $8.5 million budget) spawned three sequels, each of which was a step down in quality. Numerous copycat pictures were also churned out, but none could compare to Jaws in terms of sheer suspense. Look, Jaws is not perfect - some of it doesn't make logical sense (the ending defies the laws of physics), the shark is at times very fake, and there are technical flaws (such as glaring continuity errors) - but this is all so easy to overlook because it's such a terrific, expertly-crafted ride.