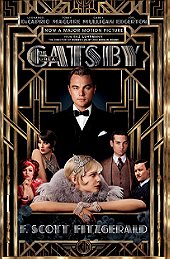 Judging by the striking mise-en-scéne and effective use of colour from posters and trailers, The Great Gatsby is quickly identified as a typical Luhrmann film. It marks his first film since 2008 and only his fifth in total. Once again, like every other Luhrmann feature, The Great Gatsby consisted of large-scale production concepts featuring a story and a variety characters that has the capability to signify powerful, thought-provoking dramatic emotions. Luhrmann keeps going round in circles because the majority of his films have so much going for them but resulted with pure emptiness and leaves the audience with very little to reflect on. Unfortunately, that is what happened with The Great Gatsby and it was an overall let-down but still had certain positive aspects.


Although The Great Gatsby is an adaptation based on F. Scott Fitzgerald’s 1925 novel, it contains almost identical visual and narrative concepts to Luhrmann’s previous film Moulin Rouge! in 2001. In fact, The Great Gatsby is almost like a remake, particularly in terms of narrative structure and character types. For example, the film begins with voice-over narration by a supporting, emotionally-ruined character telling a story about an individual who played an important part in his life and a love story unveils. In a sense, this has revealed the type of stories that Luhrmann goes for and he clearly has a passion for romantic-dramas. There are filmmakers out there who have directed films of the same genre but have delivered something different but the plot behind The Great Gatsby is nothing short of flat and almost 140 minutes of no emotional engagement.


The Great Gatsby is a typical romantic-drama but it relies on added visual effects in order to make the audience feel more attached to it. In that sense, it is Baz Luhrmann’s most visual film to date. Practically every shot in the film featured at least a glimpse of colourful, striking effects. However, the main issue with the implementation of 3D and visual effects are that they were the only features that kept the film going, which raises the question – what were they worth? They were aiming nowhere with nothing to show, message-wise, and it could have done so much more. Furthermore, the inclusion of modern music felt out of place when it is set in the 1920s. It is debatable how much accuracy in the time-setting that The Great Gatsby was trying to aim at but it just did not connect.


To mix with his glistening visual style, Luhrmann usually selects the popular Hollywood stars. Leonardo DiCaprio reunites with Luhrmann after Romeo And Juliet in 1996 and delivers a good performance as Jay Gatsby. After over a decade, DiCaprio becomes a young, striking actor and goes back to the early days of his career yet at the same time, he appears wealthy. In that sense, he was a decent choice for the role of Gatsby. In addition, Gatsby is a complex character and DiCaprio has not portrayed many characters with psychological backgrounds but he was occasionally convincing in the performance. However, there were times in which he was not. For example, his pronunciation of “old sport” when talking to another character, that becomes repetitive and progressively becomes more annoying, which does not tell us much else about his personality.


His on-screen relationship with Carey Mulligan, who portrayed Daisy Buchanan, was somewhat flat with no moral meaning behind their love for each other. It is one of those relationships in which fate and love keep them together but is not really analysed enough. In fact, it is Luhrmann trying to provide a couple that appeared romantic but did not have any emotional connection. However, as an individual performance, Carey Mulligan was definitely the best from the cast in the The Great Gatsby. Like a rich woman in the 1920s, she wore glistening costumes and make-up and has attractive physical features. Mulligan fitted well into the role of Daisy and her performance was emotional.


Meanwhile, Tobey Maguire is possibly what mainly ruined the film. Maguire’s performance was flat and pretty dry, particularly the voice-over narration. Even the portrayal of the character was disappointing in The Great Gatsby because at the beginning, we follow his story but when Leonardo DiCaprio and Carey Mulligan are introduced, he becomes overshadowed and ends up standing there in remaining scenes. Finally, Joel Edgerton’s character Tom is a typical rich but emotionally abusive husband and his performance was also pretty good but it was the emotional relationship between the two protagonists and narrative structure that was a let-down.


In many ways, Baz Luhrmann’s The Great Gatsby follows down a similar route to Martin Scorsese’s Hugo with the inclusion of visual effects in a drama; thus, creating a magical experience. The problem with The Great Gatsby is that it had a serious lack of emotional connection with the audience despite the glistening production techniques. In fact, the high-scale of visuals and production design did not need to be included at all because they just did not connect with the plot. Thus, The Great Gatsby was not an entirely bad film but it had the same idea behind almost every Luhrmann film and could have been so much better.