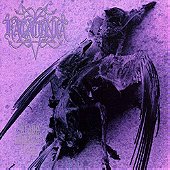 Swedes second album including Anders `Blakkheim` Nystrom (Opeth, Diabolical Masquerade, Bewitched) is often considered the band`s best, though I`ve as yet only heard this one, reissued with `Sounds of Decay` as bonus (an EP`s worth of material released shortly after `Brave...` in the same vein, though not quite as strong).

`Beautifully flawed` is how seen this album described and it`s a pretty apt way of summing up my feeling towards it. The `sixth form poetry` lyrics as well as the occasional lapses in grammar and phrasing are likely attributable to the band`s young age at the time of release, as well as English not being their first language. These flaws give the album a naive charm, however, rather than severely hindering any of the 6 tracks. The musicianship is exemplary, as is standard with Swedish bands of this ilk, and the mature arrangements belie the band`s tender years.

`Brave Murder Day` was in the unenviable position of being released in the same year as releases such as `Aenima` and `Through Silver in Blood` and was overshadowed somewhat in the context of those more influential rock/metal releases. The album is tagged `melodic death` `doom`, and even `goth` but to my mind is actually an elegant mix of all these styles. It may not get the same play-time as the aforementioned albums, or even other 90s `death metal` standards in my household, but it`s introspective vibe, unique atmosphere and well crafted songs make it stand out, and is a release I`d be remiss in not recommending.