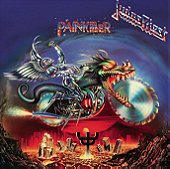 `Painkiller` is a milestone album for a seminal band, albeit one that has endured recurring criticism in the 20+ years since it`s release, much of it warranted. Firstly, this is a frequently cheesy album, one scan of the liner notes showing that it's not above shooting for the lowest common denominator lyrically, the `lightning in the dark/with a burning heart ` couplet being an obvious example; the band even stooping to `fire/desire` (groan) at one point - and these are not isolated among the 10 tracks. The infusion of `thrash` into the band`s sound resulted in `Painkiller` being the band`s heaviest release to date, though to many it was a contrived shift which attempted to chase some of the popularity and cred of bands like Slayer and Metallica. Indeed, the aesthetic the band adopt on `Painkiller` sounds rather self conscious in the context of the metal releases that preceded it, and perhaps the harshest comment I can make is that despite being released over a decade later, it hasn`t aged as well as the likes of `Stained Class` and `Sad Wings of Destiny`.

The good news is that `Painkiller` encapsulates much of why this band is held in such high esteem and has many of the hallmarks of a great Judas Priest album; Rob Halford`s soaring (and searing) vocals, the formidable Tipton/Downing axe-work, and not least Scott Travis, who is a force of nature behind the drums. There is a very good argument to be made for the line-up on `Painkiller` being the most talented the band has ever had.

The songs themselves are a tasty crop with only a few bad seeds. `Between the Hammer and the Anvil` and the blistering title-track are testament to what bloody good songwriters Halford & co are when they put the mind to it, while `Nightcrawler`, `All Guns Blazing`, and `Metal Meltdown` stay on the right side of things - these songs being cheese - albeit `tasty` cheese. I`ll forgive `A Touch of Evil` for nostalgic reasons, though `Leather Rebel` and `One Shot at Glory` are crimes against HM and best avoided lest the good name of this band be sullied. Overall, the quality-to-dreck ratio is a vast improvement over the 2 albums which immediately preceded it, which admittedly isn`t saying much.

`Painkiller` is not the greatest heavy metal album ever, nor is it even the best from Judas Priest, though many would argue with both these sentiments. To my mind it is an enjoyable but slightly hollow release from a band versatile and talented enough to produce quality music whatever path they choose to tread (and the band has changed stylistically several times since it`s inception). Sadly it was downhill after this.