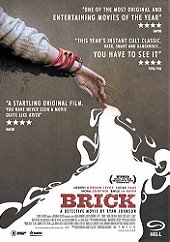 I think I'm going to have to watch this again as I'm sure it deserves more than a 7/10, but I just didn't hear enough of it to make complete sense of everything that was going on (hearing problems).

I really liked the noir-mystery style of the film, and the acting was good from everyone. I was surprised to see a couple of more well-known faces in the cast (Joseph Gordon-Levitt and Emilie de Ravin) but I think they did a good job of their respective roles and I'm glad that it was kept to a more indie feel with a less famoous cast. The camera shots and amplified sounds were also quite nice features, and definitely an improvement on attempts in other indie film (*points at Elephant*).

I'll be watching this again when I get the chance.