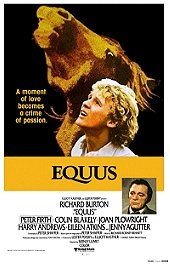 This was originally written for this list, but I thought I'd add it in here as well so that if one stumbles into this masterpiece and hesitates whether or not to watch it (...and also happens to use listal and search this movie in here), this just might convince you to do so (though I'm not saying the review itself is any good, if you can even call it a review). It's more of an opinion of the film that at least in my mind hasn't gotten the recognition it deserves. So here, knock yourself out. Or don't.

With Equus playwriter Peter Shaffer ponders very deep existential questions. How does one become exactly the person who he is? Can he himself consciously and actively affect to this end result? On what grounds certain experiences and moments have a meaningful impact to one's life? How can we hurt the people close to us? What is passion and where does it come from? And much more. Thank god he also got to write the screenplay for the film. I don't think anybody else could have pulled that off because nobody really knows the original play like he does. But yeah, the screenplay is a f**kin' masterpiece (and I think it's safe to say that same goes for the play).

But at the same time Equus, like most movies based on a play, is also a celebration of quality acting. Peter Firth and Richard Burton are on fire in this one. Such powerful, overwhelming performances from both of them. If I wouldn't know it better I'd say that Peter Firth isn't even acting in this one, he IS Alan Strang. And when Richard Burton is doing his monologues and faces towards the camera, you almost begin to wonder if your tv screen has become a mirror and if he can really see you.

And last but definitely not least you have to give kudos to Sidney Lumet. I mean, no matter what kind of a screenplay or story you have, even as complex and at times cryptic as Equus is, in every film of his I've seen the man always seems to find the perfect balance between the structure of the story and the audiovisual aspects of the film. One never outweighs the other but it feels like they're always in sync. I don't know. It's hard to explain, I guess.

But I if I could have had anything to do with the outcome on the Oscar Night in -78, Equus would have won 4 academy awards:

-Best Writing, Screenplay Based on Material from
Another Medium - Peter Shaffer
-Best actor in a Leading Role - Richard Burton
-Best Actor in a Supporting Role - Peter Firth
-Best Director – Sidney Lumet (though he wasn't even nominated and it's been a long time since I last saw Annie Hall)

Had that happened, this film just might be little more known general public than it seems to be right now. Now It'll probably go down in history as one of the underrated and less known works of Sidney Lumet. C'est la vie.

So, if you want to sit down and watch a movie that inspires you to think about that little life of yours and opens your eyes to even greater reality, then look no further.