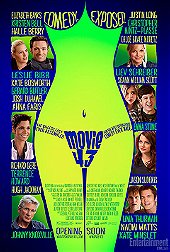 "Just when I thought this couldn't get more offensive..."

I saw an early afternoon screening of Movie 43, in a cinema with only six other patrons. The flick played to what can only be described as stunned, staggering, awkward silence. At no point did any of the patrons laugh or even guffaw. Instead, everyone sat in their seats, absolutely depressed and uncomfortable, yearning for the torture to cease. Movie 43 carries the tagline "Once you see it, you cannot un-see it," but this is actually more of a warning. Heed it! It's a film designed to shock you and make you laugh, but it will only make you yawn and check your watch on a consistent basis. In fact, the only shocking thing about Movie 43 is that so many wonderful actors took part in this travesty. 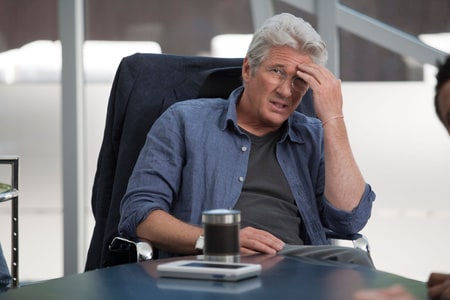 The story is framed around crazed would-be screenwriter Charlie (Dennis Quaid) who's anxious to sell a few film pitches to studio executive Griffin (Greg Kinnear). His first idea is a tale about a woman named Beth (Kate Winslet) who goes on a blind date with a wealthy bachelor (Hugh Jackman) whose testicles are attached to his neck. In another of Charlie's ideas, Anna Faris plays someone who wants her boyfriend (Chris Pratt) to defecate on her. There's also a segment in which a high-powered executive (Richard Gere) is trying to figure out why young boys are inserting their fingers and penises into the "iBabe," a portable music player shaped like a naked woman which has a fan vent in the vaginal region. If any of this sounds funny, it really isn't. At one stage, Griffin becomes fed up with Charlie's woeful ideas and tells him to leave his office, but Charlie pulls a pistol and threatens to shoot Griffin if he doesn't listen to the rest of his ideas and buy them. Frankly, if I was given the choice between a bullet to the head and watching more of Movie 43, I would've chosen the fucking bullet.

In essence, Movie 43 basically asks us to watch cinematic treatments of ideas that everyone in the film acknowledges are terrible. Yes, that's the premise and hence Movie 43 is meant to be bad, but that does not excuse its terribleness. Shit unfunny ideas are shit unfunny ideas, even if everyone is self-aware. 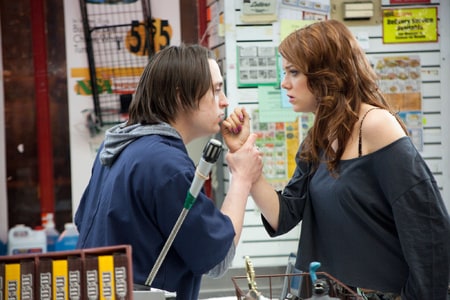 The brainchild of director Peter Farrelly, Movie 43 was in production for about four years, with the filmmaker waiting for actors and directors to become available to shoot their segments. It's a good idea in theory since it allowed Farrelly to assemble one of the biggest casts of A-list actors in history, but the result is completely dire, with nobody able to enliven the dire material. Irritatingly, some of the sketches were actually built on promising conceptual frameworks, but everything is obnoxiously laugh-less when translated to the big screen. Moreover, Movie 43 had the freedom of an R-rating to give its comedy more bite. What a shame the makers treated the opportunity like 15-year-old boys, favouring lazy gross-out jokes and haphazard swearing in lieu of genuine wit. Some PG-rated comedies are funnier than this. Fuck, YouTube users are capable of funnier content, which they make on the cheap and release for free. There's no fucking reason for a $5 million theatrical comedy to be so thoroughly dreary.

The only thing remotely funny in the picture's entire 90-minute running time is one cleverly self-deprecating line from Seth MacFarlane that was most likely improvised. As for the rest, the filmmakers rely on horrendous humour, with Halle Berry using her breast to make guacamole, and Chloë Grace Moretz smearing period blood all over her boyfriend's house. Oh, and Stephen Merchant gets a tattoo of a large dick on the side of his mouth, complete with cum dripping from its tip. Naomi Watts even plays a mother who home-schools her child and chooses to be his first sexual encounter. I swear to God I'm not making any of this up. Once the film ends, there's an outtake reel and apparently an additional vignette after the end credits expire. I cannot comment on the quality of either, as I walked straight out of the cinema as fast as I could once I saw credits appearing. 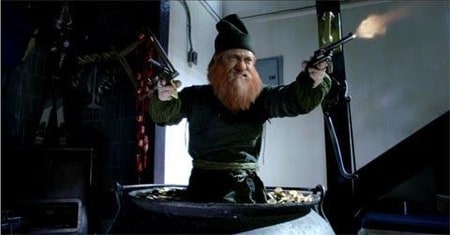 It is only February, yet Movie 43 is the worst movie of 2013. Not the worst so far...it is the worst, period. It is scientifically impossible for any other release this year to be worse. At least movies like The Room and Plan 9 From Outer Space possess a certain charm due to their awfulness. Movie 43, on the other hand, is just a stillborn - obnoxiously unfunny, lethally tedious, and completely unwatchable. In coming years, it will probably develop into somewhat of a cult curiosity, with the sublime cast list fooling viewers into at least giving it a shot. Which makes it all the more disheartening that Movie 43 is not a better or funnier motion picture. Judging by the fact that the actors all refused to participate in promotion, it's clear that everyone regrets taking part. And now rising stars like Moretz and Emma Stone will have this gargantuan black mark on their filmographies.