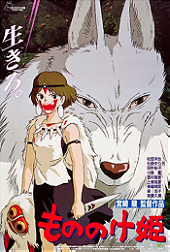 ''You cannot change fate. However, you can rise to meet it, if you so choose.''

On a journey to find the cure for a Tatarigami's curse, Ashitaka finds himself in the middle of a war between the forest and Tataraba, a mining colony. In this quest he also meets San, the Mononoke Hime.

Mononoke Hime(1997)Princess Mononoke is quite simply not just a Japanese animation; It is however a phenomenon. During it's box office run in Japan 1997 it didn't only become the highest grossing Japanese film of the year, but the highest grossing Japanese film...ever to be released.
Mononoke Hime takes place in 15th century Japan and opens with a warrior named Ashitaka in fierce battle with a Tatari Gama (a huge boar with worms covering it's body). Ashitaka kills the demon and successfully defends his village from it, but in the battle he is touched by the gigantic monster on his arm; leaving a dark scar as a reminder. The village doctor tells Ashitaka that it is a curse and is slowly killing him. Convinced that there must be a cure, Ashitaka leaves the village never to return....Thus begins the epic story of Mononoke Hime.

So what makes this film so amazing? First of all, the obvious: the writer/director and animator: Hayao Miyazaki. Known for revolutionizing the animation world with his non-conventional children's films (Kiki's Delivery Service, My Neighbor Totoro, Spirited Away), this is his most mature film, and I don't just mean in terms of content. Yes, this film is violent, deep and not for the squeamish but it's beside the point. The story is dark and deeply personal. Miyazaki had stated that after all his more family-friendly films were out, this was the film he felt he just had to make. There is an air of deep seriousness that comes with this film that is hard to miss.
Please remember this, most of all: Miyazaki's films are not strictly Anime.
Miyazaki is completely different in style, animation, texture and story. The one thing that angers more than anything are the people whom hurl abuse at this project because they do not like Anime. A reminder to everyone who hasn't seen this film is to take this into account.

Miyazaki's paints a world like no one has ever seen, and always beautiful and fascinating. What really brings his films to life is the resonating music. Half of what makes his films so beautiful is the score of Joe Hisaishi; perhaps one of the most gifted musicians in films around. His music is intriguing, mysterious and impossible to ignore. With films like this, I get to thinking his music was made for Miyazaki, and Miyazaki's films were made for Hisaishi. They balance each other perfectly and mirror each other in harmonic art.
Visually it's got so much going on to practically experience the abstractions that Hayao Miyazaki folds up into the rest of the story. The story itself trails along with the best of epic fantasy, with this crucial, earth-shattering quest that works on that level of action-adventure; as well as the mythological side of things. Some have stated that it is a piece of complex ideology in structure and storytelling; bordering on confusing and puzzling bewilderment. I would disagree, although I can see what they mean; You have to pay closer attention. On a more profound level, if one could call it such, it's really not hard to follow.

The protagonist of the film, is the type of tragic hero, though with one clear sight amid the chaos in his mind - peace. He is cursed by a sort of worm resembling jelly demon that runs amock in the darker recesses of the world. He searches for something to rid him of his scars while on the human side at some points (mostly dominated by the women impressed- or against- his skills); and with those of the wolves on the other side. The title character is part of the latter, though also human, bringing a little more of the underlying symbolism with a character. Then there are also the boars ready to destroy the humans; even tat the expense of their lives. Amid the battles that rage on, leading to the significance of a certain Deer God as the centerpiece of the balance of the forests and civilizations; not too much is made explicit. At the same time, the side taken by the cursed hero is even questioned by one character; with that part connected among the others, the story elevates what could have been a kind of smothering over-symbolic representation into what is necessary and spectacular about the whole story. Quite simply, another masterpiece of Hayao Miyazaki's Studio Ghibli; that echoes a sensational message about our treatment of animals and the Environment.

''In ancient times, the land lay covered in forests, where, from ages long past, dwelt the spirits of the gods. Back then, man and beast lived in harmony, but as time went by, most of the great forests were destroyed.''