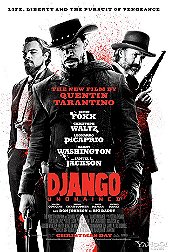 Django Unchained marks the second film from Quentin Tarantino that mixes his old-school trademarks of violence, recurring themes, creative dialogue and badass soundtracks within a setting loosely based on historical events. Tarantino already interpreted his own climax of World War II in Inglourious Basterds through his passion for cinema and in his latest feature, he provides a similar story structure. This time, he tackles a story set in Deep South America where he adds his own adjustments about black slavery, a widely controversial subject. Despite this, Tarantino used elements from his past films in Django Unchained which leave their mark and, therefore, adds more oppressiveness as well as originality to the storyline. Furthermore, it is important to note that Django Unchained does not focus on historical accuracy of that era, but in his own way Tarantino creates a second revenge-fantasy masterpiece which at the same time, pays homage to classic spaghetti westerns.


Quentin Tarantino has caused a series of controversies making Django Unchained as he has had accusations of racism thrown at him due to storyline and dialogue. However, the beauty of Tarantino's screenplay in Django Unchained is that he is simply presenting, in his own creative style of writing, the animosity from white people towards blacks during that period and the general horrors of slavery. Therefore, Tarantino twists history and forges it into his movie-maniac mind, which is what we have with Django Unchained. Furthermore, he continues with his old-school elements of black humour. As proved in many of his previous films, humour has been one of Tarantino's strongest points because he somehow makes funny jokes that are not always considered that way. It becomes worthwhile in Django Unchained as he still makes violence humorous to watch but at the same time, he doesn't deliver all the dark comedy that we have seen before. The film contains a mixture of witty one-liners, particularly from Dr Schultz, and at times hilarious jokes that don't have to step above the bar to be funny. Therefore, it has climbed above Pulp Fiction to become Tarantino’s funniest film to date. However, the only major Achilles-heel of Django Unchained were the last 20 minutes. The pacing was slow and it almost meant nothing to the rest of it.


Oscar-winning actor Jamie Foxx delivers his best performance in years as Django. Originally, the role was offered to Will Smith but Foxx ultimately displays the true nature of this character. Django is a newly-freed slave who becomes a deputy bounty hunter along with Dr. King Schultz but has the desire to rescue his wife from the ruthless Calvin Candie. So, along the journey, Django becomes this badass individual that we all want to see and was seen in spaghetti westerns. On the other hand, regarding his wife he is at times a sensitive being. Still, the purpose of Django is not spilling out emotion with his wife and thankfully, Tarantino does not make this his key focus. He is merely on a mission of revenge against his former enemies as well as to make something of himself. Nevertheless, Jamie Foxx takes a little while to get into the role of Django but when he does, he was absolutely fantastic! It's just a shame that he was overshadowed particularly by Christoph Waltz and Leonardo DiCaprio.


Christoph Waltz literally carried Tarantino's previous film Inglourious Basterds and deservedly earned an Academy Award for his role as Colonel Landa. Waltz stars in his second Tarantino feature and delivers another stand-out performance as dentist turned bounty hunter Dr. King Schultz. Although the character was written purely for him in the first place, Waltz's charisma as an actor made him fit perfectly into the role. In that sense, Waltz does this through hilarious one-liners and the simplicity he beholds. The film is surrounded by oppression and animosity but Schultz represents the conscience of the human mind and becomes a character that is balanced and a non-judgmental figure. Furthermore, Leonardo DiCaprio suddenly jolts away from his heart-throb status as an actor and goes into a much dirtier, sinister and racist role as he portrayed antagonist Calvin Candie. The name 'Candie' and his plantation location 'Candieland' sounds quite friendly but how Tarantino handles it is quite sadistic. Like Colonel Landa, Candie is a charming psychopath and DiCaprio did this incredibly well. Therefore, you can now see why Tarantino originally wanted him as Landa. Samuel L. Jackson delivers one of his greatest performances as Candie's black house slave Stephen and Kerry Washington is fantastic too as Broomhilda, the woman in the center of it all. We also get great cameos from Jonah Hill, Franco Nero and Don Johnson as well as a mediocre one from Quentin Tarantino.


Evidently, Django Unchained is Quentin Tarantino's most controversial film to date but like the truly great artist that Tarantino is, he manages to take it to whole new depths through his gifted old-school style and sends us on this Old West journey where he pays his own respects to spaghetti westerns. Django Unchained is, of course, horrifying and pretty gut-retching due to the racism and slavery but it unusually contains heart-to-heart moments (very unlike Tarantino) and sparks a bond of friendship between Schultz and Django and finally, very much like Tarantino, it is hilarious to watch. Nevertheless, Django Unchained perhaps isn't on the same level of creative brilliance as Pulp Fiction and Inglourious Basterds, but it is still another Tarantino masterpiece that his biggest fans should enjoy.