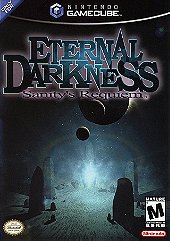 It's been 10 years since the release of Silicon Knights' Eternal Darkness: Sanity's Requiem on the Nintendo Gamecube, and I'm a little ashamed to admit that this was my first play of the game. That isn't to say it's the first I'd heard of it. On the contrary, I felt compelled to write this review because of how much I'd read prior to playing. This game makes the Top 10 on practically every horror list on the Internet and is generally considered a "lesser known" title, although how "lesser known" depends on your taste and experience. If you're like me and like hearing what other gamers have to say, then you undoubtedly have heard something about Eternal Darkness (if you haven't played it yourself). And that is probably enough to bias the way you will see the game or even the way you play it.

This isn't necessarily a bad thing, but I have to say, with this game, the less you know going into it, the better your overall experience will be. So, if you are thinking about giving it a shot and have yet to read much about it, you should close this review and just give it a go.

In terms of ED's story, I am reminded of the 1968 quiet thriller from Quebec, Isabel, starring a short-haired Geneviève Bujold, and the fiction of Edgar Allan Poe and H.P. Lovecraft. The game wears the Poe-Lovecraft influence on its sleeves, constantly reminding you of a foreboding presence, an ominous feeling or some other vague sense of the eerie. The entire game revolves around the secrets of the Rhode Island Roivas family and involves traveling to various ages in the past to unravel the Roivas connection with the occult. You play as Alexis Roivas in 2000 A.D., arriving at the estate to tend to your recently deceased grandfather's last affairs. Eventually, you discover the Tome of Eternal Darkness which gives you the ability of magic or "magick." You also find hidden chapters, pages of the Tome scattered throughout the mansion. Each page enables you to travel to another time and reveal more of the story.

Mechanically, ED is very simple and, well, even boring. You wield 3rd-person control over the protagonist of the current chapter. The left stick moves you through the dim, but detailed interiors of the old mansion, of temples and cathedrals and various other locales. During your explorations, you'll come across items or points of interest, indicated by the appearance of the red B button. The action of the B button changes between "Examine" and "Take," which are essentially the only two contexts of interaction in the game.

Camera angles are preset and, sadly, uninteresting. There was much wasted potential in what could have been a very cinematic camera system. At times, the angles were even an obstacle to finding doors, levers or key items, effectively hiding these spots from view, and forcing me to resort to the almost useless map.

There is also a bit of level recycling but monotony within each chapter is kept to a minimum. Overall, you are doing the same thing in every chapter: find Tome of Eternal Darkness, collect weapon, and use magick/items to complete chapter. So there is an overarching repetitiveness to the game, but within each chapter, the tasks are varied enough, even if the same settings return.

As for the "magick" system, it was definitely not my cup of tea, but I won't ding the game harshly on it. My main problem was that the spells are built from runes that have absurd Klingon names. Good luck remembering them.

In terms of difficulty, ED is just right, with few hair-pulling frustrations. Where the game truly shines is in the Sanity system. Again, if you are going to play this game, just stop reading and play it. The Sanity aspect of the game is its selling point. The same idea was used less effectively in games such as Clock Tower 3 and Haunting Ground, but ED did it first and did it best. Again, to get the most out of this, you need to go in as blind as possible, so don't watch any gameplay videos or any spoilers of the kind. The idea of the Sanity system is to mess with your head, and how can it do that if you know what's coming in advance?

Overall, I regret reading anything about this game before playing it. ED does an excellent job at setting the atmosphere, particularly in the mansion scenes. The insane scenes were just downright amazing and more games should explore this idea. But for me, the mood was somewhat ruined by the magic system, the redundant action and the funny plot.

You might be interested to know:
In recent news, it turns out plans for a ED sequel were scrapped by Nintendo after Silicon Knights tried to sue Epic Games and ended up getting countersued instead. It looks like at one point Eternal Darkness 2 was in the works, but now it's anyone's guess.