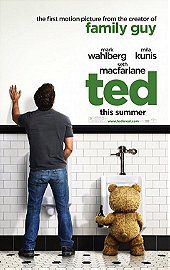 Ted is the feature film debut of writer/director/star Seth MacFarlane, who's best known for his hit television show Family Guy. It's hardly surprising, then, that the film bears a notable resemblance to long-running cartoon series, as MacFarlane retained his proclivity for toilet humour, non-sequiturs, one-liners, obscure movie references and pop culture shout-outs. Luckily, Ted is also sharper and wittier than most recent Family Guy episodes, resulting in a comedy that's, for lack of better word, fucking hilarious. Furthermore, the film is based around an inventive central premise. Calling upon his incisive writing instincts, MacFarlane here deconstructs one of the most tiresome comedy plots of recent years - the "decent young guy held back from maturity by a churlish best friend or a cherished toy from his childhood" plot - by taking it to its logical symbolic extreme: the boorish best friend is actually the beloved childhood toy. By doing this, MacFarlane snarkily addresses the "What happens next" question of every "boy and his magical buddy" movie ranging from E.T. to Pete's Dragon. 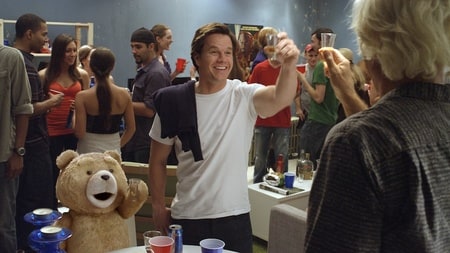 A shy 8-year-old social outcast, John Bennett (Wahlberg) makes a Christmas wish that his teddy bear would come alive so they can be real friends forever. Sure enough, the magic of the cosmos pulls through, and John awakens the following morning to find that his bear Ted (MacFarlane) has become a living, speaking being. The talking teddy bear becomes a short-lived celebrity, but, through it all, John and Ted vow to remain best friends forever. Fast forward to present-day, however, and the pair are going nowhere fast, spending their days smoking pot and watching TV. While Ted is scraping by just fine, John desperately needs to get his life in order and grow up, as his long-term girlfriend Lori (Kunis) is getting fed up with his crap. Faced with an ultimatum from Lori, John urges Ted to move out and start living his own life, but the friendship is hard to break and John is left choosing between his beloved teddy bear and the woman he loves.

Beneath Ted's routine of lowbrow gags, there's unexpected intelligence and thoughtfulness which places this above less skilful comedies. The story predominantly concerns John's maturation, and the commentary on the realities of growing up are surprisingly poignant. Admittedly, though, Ted does contain a few narrative elements that feel too standard-order. The script is formulaic to extremes, and you will probably be able to guess everything that happens throughout the film. Yet, the film actually gels far better than it had any right to, because it's so genuinely side-splitting. Likewise, the film has a tendency to be cheesy (especially the ending), and there's a running subplot about a creepy fan who wants to kidnap Ted which seems to have been shoehorned into the script to allow for a big finale. But in MacFarlane's hands, everything comes together beautifully. It's the execution that matters when it comes to this type of film, and, thankfully, with the original device of an alive teddy bear combined the witty writing and energetic direction, Ted just plain works. Better yet, there's genuine sweetness here to supplement the laughs. 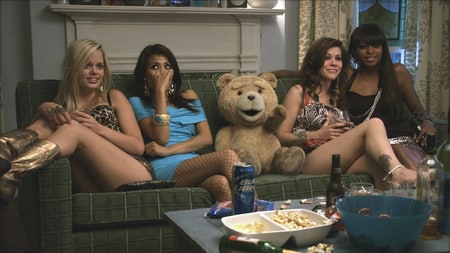 Those who hate Family Guy, or Seth MacFarlane's humour in general, will probably hate Ted just as much since the comedic styles are similar. But fans of MacFarlane's humour will have an utter ball with this picture. And commendably, the laughs go beyond the one-note gag of seeing a foul-mouthed teddy bear doing things that he just shouldn't be doing. As a matter of fact, the script (by MacFarlane, Alec Sulkin and Wellesley Wild) is very witty, with obscure pop culture references, blue-collar bar-room humour, and even a party spotlighting a surprise cameo (from a laudably game actor) that should have viewers absolutely wetting their pants. It's also important to note that the jokes work so well not just because they're vulgar, but also because of the immaculate timing and delivery. There are a lot of lowbrow laughs here, sure, and thus your liking of Ted is definitely dependant on your taste for comedy, but the film undoubtedly worked for this reviewer.

It helps that Ted is such a terrific character. Seriously, he's one of the greatest movie characters of 2012. Played by MacFarlane through motion capture, the special effects are solid here; not exactly photorealistic, but nevertheless expressionistic and believable. Ted also fully interacts with various environments in different types of lighting to amazing effect. Ted never looks cheap or phoney, nor does he ever stand out as anything other than part of this world. Like last year's Paul, you soon accept and believe the character as real, rather than just a digital creation. Injecting personality into a CGI teddy bear is no mean feat, yet MacFarlane pulled it off. Furthermore, you can believe Ted's friendship with John. Ted is a fantasy, but MacFarlane makes us believe this fantastical story, which makes the characters more relatable and the story more engaging. 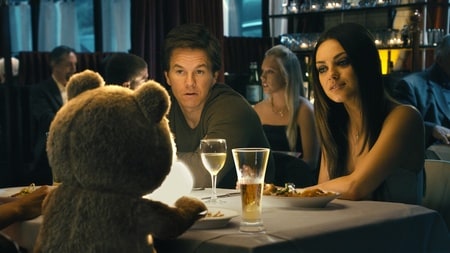 At first glance it may seem like Seth MacFarlane just recycled his Peter Griffin voice for Ted, but the talented voice actor actually created a new voice with a Boston tinge (whereas Peter was distinctly New England). It's an engaging vocal performance with spot-on comedic delivery, and it's hard to imagine anyone else playing this role. Alongside him, Mark Wahlberg is extremely well-used as straight man John. He's completely believable and likeable, and, crucially, whenever he shares scenes with Ted, it never seems like he's interacting with something that's not actually there. (A punch-up between Ted and John is a particular success in this respect.) Mila Kunis, meanwhile, was saddled with the clichéd role of a frustrated girlfriend, yet she transcends the material due to the level-headedness she displays, not to mention her inherent likeability as an actress. There are a range of colourful supporting performances here, not to mention several celebrity cameos that this reviewer simply cannot spoil, and suffice it to say everyone hit their marks beautifully. Patrick Stewart even narrates the whole thing, which lends a bit of gravitas to the proceedings.

While cynical filmgoers may mark Ted down for being predictable and generic, the fact is that this is a comedy which aspires to make you laugh, and it is funny as hell. That's no small achievement. It won't change your life, but it's a wonderful, well-told comedy which wholly satisfied this reviewer, not to mention it's more heartfelt than Family Guy has ever been. And, like all of the best comedies in history, it contains countless insanely quotable lines of dialogue. Ted is an instant classic, pure and simple.