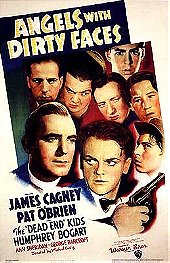 Had a lot of high hopes for 'Angels With Dirty Faces'. There are many great gangster films out there, some cinematic milestones, and when one talks about actors that excelled in this type of film James Cagney is somewhere near the top of the list. Really like to love a lot of Michael Curtiz's, a great and very versatile director, films, especially 'Casablanca', 'The Adventures of Robin Hood' and 'Mildred Pierce' and even lesser efforts are watchable.'Angels With Dirty Faces' blew me away. It is up there with the best gangster films of all time to me and many others, which is evident from how massively influential it is and how often it's imitated. 'Angels With Dirty Faces' is also one of Curtiz's best films, well certainly among my favourites of his as of now anyway, one of Cagney's finest hours and has an ending (justifiably near-universally lauded) that left a huge impression on me emotionally.It is a wonderful looking film, Curtiz's films were always well made and his visual style was actually pretty unique at the time. While the production design is atmospheric and the lighting very artistic and moody, it was the cinematography that left me spellbound. Not just the stunning composition and how much it enhanced the atmosphere but also the use of camera angles, very varied kinds without being gimmicky and it is always fluid and ambitious.Max Steiner's score swells sumptuously and thrillingly and is very haunting and effectively dramatic. Without being intrusive or strident. Curtiz's direction is exemplary, the classy stylishness and boldness evident throughout. It shines especially at the end, well pretty much everything shines at this point. The script is gritty and lean yet also sophisticated and sincere. Some of it is quotable too.The story has so much great with it too. It is fast paced and appropriately tough as nails, while also having emotional impact. The chemistry between Cagney and Pat O'Brien and Cagney and Humphrey Bogart have sincerity and hard boiled tension and the moral, one still having a lot of truth now, makes its point without beating one around the head. The shoot out is thrilling and suspensefully staged, and the Dead End Kids' moments have heart and levity, but the highlight dramatically is the ending. Can't begin to tell you how powerful it is, my gut was practically wrenched watching it and after my heart was ripped into two. The characters are interesting, even though Rocky was very flawed it was hard to hate him.Cagney is magnificent and shows why his reputation as an icon in gangster films is richly deserved. It is an intense and bold yet oddly likeable performance and one of his best, his acting at the end is some of the best he ever did. O'Brien is sincere and a powerful contrast while Bogart plays a weasel of a character pretty chillingly. The Dead End Kids add a lot too.Altogether, brilliant. 10/10