Packs a lot of fun but breaks little new ground

What can I possibly say about The Avengers that you haven't already read somewhere else? Probably nothing. But I'll throw my two cents in anyway...

Over the years Marvel Studios has captured the imagination of both comic-book nerds and normal people alike (I kid, I kid) to an insanely impressive degree. How? Well by spending a shit-load of money, acquiring many top-notch talents, and taking a few well-calculated risks -basically all of which have paid off incredibly. (Only ONE film cost more than it grossed, and it was a co-production that suffered a mere 25-million dollar loss. Bonus points to whomever can name that movie.) By now Marvel has created a movie-making empire that knows no bounds. I predict that summer block-buster super-hero movies will NEVER GO AWAY. Ever. Great news to some. And honestly I don't particularly mind. 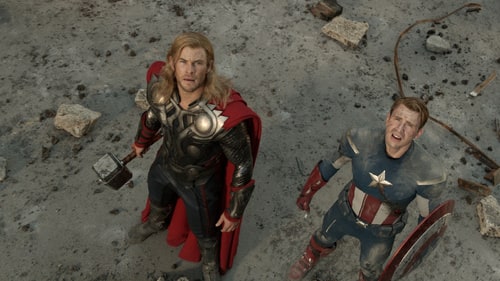 So, how did the latest entry into the spandex-hype Olympics go over for me? Just fine. Er, no, I mean it was fine, but that's about it. And really, that's okay.

What I mean to say is that The Avengers is not my new favorite movie and I won't be purchasing a copy on Blu-ray. But it was a mostly enjoyable time at the theater and a pretty good popcorn movie. I still think Thor was a better film and I always will, but I consider The Avengers to be a good deal more impressive than Captain America. Putting it on a par with the Iron Man films might be a stretch, but even as I write this I'm beginning to suspect that possibly none of them would have more or less "staying power" with me than the other. So yeah, you know The Avengers, for all its hype, ranks somewhere in the middle for me. 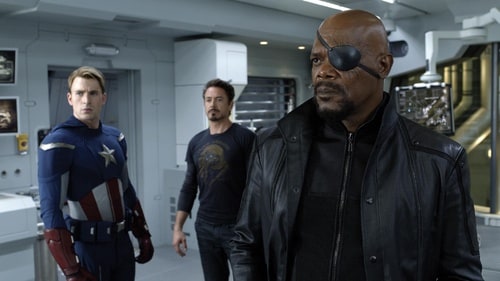 I will say that, on the whole, the film did a rather impressive job of providing ample screen-time to all its heroes and not short-changing anyone in particular. It needed all of its 142 minutes to do it, but even so, the pacing was never a real issue and I didn't check my watch once. That may sound like modest praise, but I do mean this as a noteworthy achievement. That said, the film felt a bit stale at times in its scene transitions and in terms of tone and content. I'll go ahead and assign some of my trouble with this to Joss Wheedon, whom I simply don't ever foresee becoming one of my personal favorite director/writers. For one thing, I don't find his humor as clever or as... well, funny as most seem to. I did laugh a number of times throughout the film, but generally not with any real amount of mirth. The quips eventually feel showy and bland at the same time, and if even one of you knows what I mean by this then consider me thrilled. 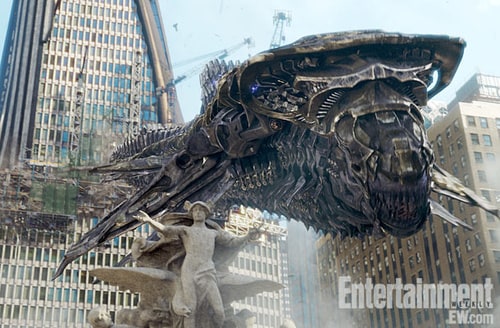 Also, while the final third of the film does deliver some excitement, the action sequences eventually over-stay their welcome by nearly an entire reel and began to feel silly and slightly redundant. I can only watch so many giant flying prehistoric fish robots tear open the sides of Manhattan skyscrapers without a single observable casualty for so long. But again, I'm nit-picking. More exciting were certain instances of in-fighting and smart-ass-ery between our heroes. The way some of our characters' reputations proceed them made for genuinely interesting fare. And the idea of our superheroes questioning one another's abilities and usefulness provided some very entertaining and captivating exchanges. It was often these moments that the film was at its strongest.

But with so much happening on screen, I think the usefulness of a typical review is limited. So from here I'll run through the characters and offer my observations. (Below, from left to right) 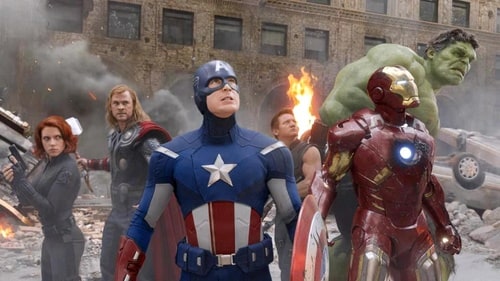 Black Widow: The most pleasant surprise of the film. Scarlett Johansson's character wasn't given much to do in Iron Man 2 so hers was the returning character with the most to gain. And indeed it was nice to see Black Widow fleshed out here. (No, I don't mean to suggest a semi-nude Scarlett scene.) I enjoyed her back-story well enough and I believed her character (which actually becomes key and even more fun in a couple of "interrogation" scenes) Johansson looks about as beautiful as I've seen her and she does a very good job with her material.

Thor: Thor remained agreeably dorky in that Norse god way of his, though with fewer "fish out of water" jokes, as this marks his second visit to Earth. Actor Chris Hemsworth once again gives off a charming, good-natured, semi-dullard, but decidedly likeable vibe without sacrificing anything in the way of badassness. This comes as some relief when positioned alongside Tony Stark's -nah, let's face it- Robert Downey Jr's douche-baggery.

Captain America: Still boring, still kind of a tool, still overwhelmingly dull at his core and bland around the edges. If planet Earth could be saved by good-looks alone, Chris Evans would probably be your guy. Hell, he'd likely have his own monument in every major city. Just don't ever ask him to save a movie. In fact, if he begins to show up on screens all over the place, why hell, just give Loki the damn planet. Anyway, the film tries to give Skippy DoRight stuff to do, but as often as not it seems a bit forced. "Sure Captain, your shield can boomerang back to you the way Thor's hammer does. Fine, whatever."

Hawkeye: I'll admit to not knowing shit about Hawkeye going into the film. And guess what? I still don't know the first damn thing about him. Except for he's a master marks-man with a bow and that what looks like two dozen arrows are in fact two thousand. I've enjoyed Jeremy Renner in previous roles. Nothing about his performance really stood out here.

Iron Man: Tony Stark naturally remains the smug, overly-pleased with himself, given most of the "best" lines in the movie, douche-bag that we've all grown to love/hate. Frankly this persona has worn thin with me and I find it increasingly difficult to find much amusement in Downey's portrayal. I understand that he's probably no better or worse here, but I've just grown tired of the character. (Similarly I've never seen Pirates of the Caribbean 3. I'm only slightly more inclined to see Iron Man 3. What? There's 4 Pirate movies? Get outta here.) That said, watching Iron Man fly around and blow stuff up is still really fucking cool looking.

The Hulk: I actually haven't seen either of the Hulk films. So yes, I suck. But if you asked me who my favorite character in The Avengers is, I'd have to say Mark Ruffalo's Dr. Bruce Banner, no contest. Given the somewhat limited screen-time given him, Ruffalo absolutely owns this role as the tortured and emotionally repressed super-genius (who holds a Ph.D. in Nuclear Physics). Ruffalo possesses a certain easy world-weariness that lends itself perfectly to the role, as well as suggestion of emotional depth and mystery that one can never quite perceive but is nonetheless always aware of. And the raging green Hulk monster looked really impressive, whether in frantic action moments or standing still. Nice job all around with this character. 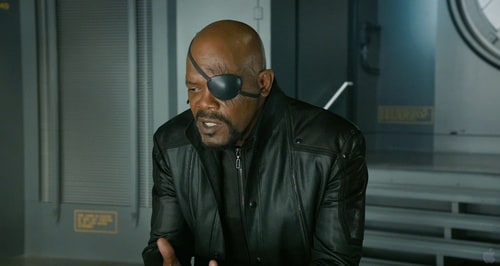 This brings us to Nick Fury who I won't say much about other than that from beginning to end I was mostly conscious of Samuel L. cashing a paycheck. Hate me if you must, but nothing really excited me about his character. The fact that he often shares his scenes with Cobie Smulders (how's that for a name?) helped. She plays Agent Maria Hill -essentially the ship's first-mate for all intents and purposes. Looking really, really pretty accounts for any remaining purpose and she excels at it. 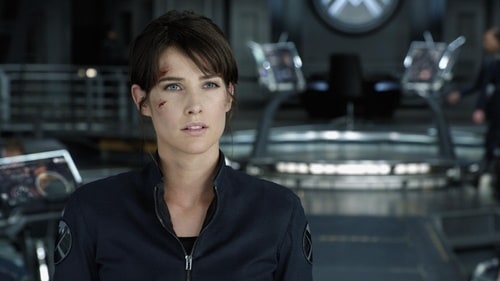 Finally we have Loki, our primary villain. Loki still exudes some of that bitter, trench-coat wearing (c'mon, look at his costume-design) high school outcast turned high school shooter persona that we met in last year's Thor. Understand I'm not making light of such atrocities. It's literally one of the major things that come to mind -or mine, anyway- when observing his character. Played by Tom Hiddleston he remains something of a lackluster villain here. Not sure what it is, just lacking that certain something. But he's crazy and jealous and power-hungry, and a little pathetic and that adds up to dangerous. Or just dangerous enough to make the film get by. And certain camera treatments of his character (particularly high-angle shots) helped with any convincing that still needed doing. But I don't think there's much mileage left in his character. 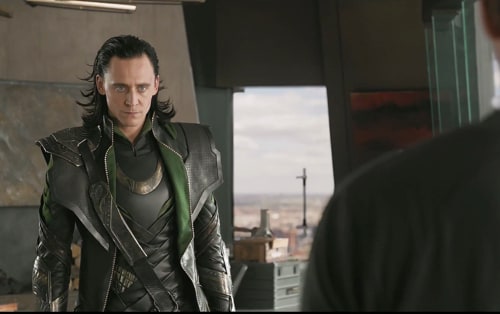 Ah, but that brings me to the mid-credit scene and I wouldn't dare spoil it here. Let's just say I immediately recognized the character in question -which, more than anything else, reveals a certain level of dork in me that I wasn't fully aware of. You know, just in case my uncharacteristically long treatment of this film left any doubt.