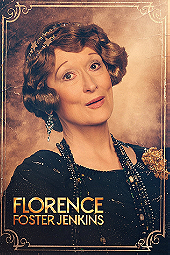 To be honest, I wasn’t really sure what to expect from this flick but since it was directed by Stephen Frears and starring Meryl Streep, I was quite eager to check it out. Well, the whole thing really had some potential. Indeed, as displayed with ‘Ed Wood’, if you can make a fascinating movie about the worst director of all time, why not make a movie about the worst singer ever? Unfortunately, I’m afraid I didn’t care much about the approach they have chosen. Indeed, while Ed Wood seemed to be a seriously incompetent film maker, however, he never believed he was a great director while, in this case, Florence Foster Jenkins was displayed as a delusional idiot. As a result, it was rather difficult to root for her. To make things worse, everyone in her inner circle, especially her husband, constantly enabled her delusional behaviour and even more problematic was that their intentions were never cleared. Indeed, did they do it for the money or did they do it because they really cared for her? Well, by watching this movie, you’ll never know as the makers never seemed to make up their mind on this matter. In fact, I think they should have focused more on the fact  that, even though Florence Foster Jenkins was a terrible singer, she was actually really popular at the time. Indeed, in order to have a great time at a concert, either as a performer or as the audience, it doesn’t necessarily mean that the people on stage need to actually have any musical skills. The will to perform and to have a great time might be actually sufficient and it was apparently the case for this unique woman. Unfortunately, in this movie, they instead went for the easy laughs and spent way too much time on showing how ridiculous she was. Still, there is no denying that Meryl Streep delivered another solid performance. indeed, not only it must have been extremely difficult to mimic Jenkins’s awful singing skills but she also completely disappeared in her character. There was also something sweet about the couple she made with Hugh Grant. Anyway, to conclude, even if the damned thing never really worked for me, it was still a decent watch and I guess it might be worth a look if you like the genre.