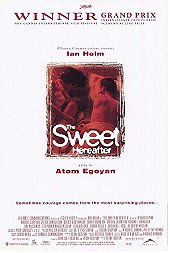 Since I kept hearing some pretty good things about this flick, I was quite eager to check it out. The last 20 years, I have tried to follow Atom Egoyan's work but everything he made recently turned out to be rather underwhelming ('The Captive' being an all-time low for the Canadian director). Well, after all these years, it was really neat to finally see his magnum-opus and the reason why the guy was one of the most heralded directors back in the 90's. To be honest, it wasn't an easy movie to decipher though. Indeed, you had first some random chronology which is usually a useless gimmick but it did work very well here. Then, the motivations of Steven Mitchell were also rather obscure. Indeed, it seemed rather unlikely that he did it for the money but, then, why did he try to convince this community to get a trial? Maybe because it was his job and he was good at it? Anyway, eventually, it was not a movie about greed, it was a movie about grief and the different ways you can deal with this emotion. Indeed, the people of this small community needed some closure, even deserved it but it was denied to them and you can't blame them for trying to find it by going through this judicial process. Unfortunately, they will probably never reach any kind of closure, their lives, for most of them, will be shattered for good and no lawsuit, no money settlement, would really alleviate their sorrow. It was all intertwined with the story of his lawyer who was also grieving in his own way, even if his daughter was not actually dead. Indeed, after death, drug addiction must be the most dreadful nightmare for any parent. However, even though most movies will sell you the idea that drug addicts can recover, it is not always the case. For Steven Mitchell, even if he still loved his daughter after all what happened, she basically completely disappeared and the only thing left was her addiction which must have been really heartbreaking for the poor guy. That they managed to show all this in just a few phone calls was just really impressive and Ian Holm delivered here one of the best performances of his career. Anyway, to conclude, I'm glad I finally watched the damned thing and it is definitely worth a look, especially if you like the genre.