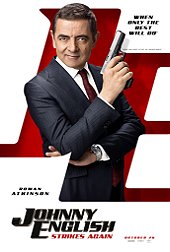 To be honest, I didn’t expect much from this flick but, somehow, I still ended up watching the damned thing. At least, it was not worse than its predecessors. On the other hand, I have to admit that I didn’t remember much about them except that they didn’t really impress me at all. However, it was definitely not an improvement either. Indeed, if some of the jokes were actually fairly amusing, most of it was still completely forgettable. On top of that, the plot was just so generic and hardly entertaining and, after 10 mins, I lost most of the interest I might have had at the beginning. Apparently, the plot was also almost identical to the 1st instalment which was rather lazy but, on the other hand, you could argue that all the James Bond flicks pretty much all look alike. Still, in this case, it didn’t help that the bag guy was rather lame. Jake Lacy was also hardly intimidating with his puppy eyes and he would be the last guy I would hire to play a nefarious villain. On the other hand, Olga Kurylenko was a perfect choice to play such a femme fatale. Indeed, Kurylenko was as usual quite gorgeous to look at and she did what she could with this material but it is rather sad that, exactly 10 years after getting her breakthrough with James Bond, the only gig she could get was to show up in such a lame James Bond spoof. Eventually, even though the idea of turning Mr. Bean into an incompetent spy had some potential, it’s too bad they never managed to properly develop this idea into something really entertaining after 3 instalments. Anyway, to conclude, even if I have seen worse (the Mr. Bean movies are pretty much unwatchable for example), it was still rather weak and I don’t think it is really worth a look.