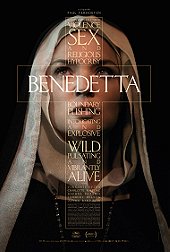 To be honest, I have to admit that I was slightly worried that Paul Verhoeven would come up with something rather sleazy. Well, eventually, the Dutch master didn’t disappoint, at least, not me as it turned out to be a massive Verhoeven festival. Indeed, he went pretty much all the way with some over-the-top hallucinations, violence, blood, full frontal nudity and some good old sex. Seriously, even if probably not everything did work, the whole thing was still seriously intense. Eventually, he gave us all the various ways anyone at the time might approach religion (as a real vocation, as a capitalist enterprise, as a powerful political weapon, as a simple way to get fed or a way to escape a toxic household). What I enjoyed the most was how ambiguous Benedetta was until the very end. Indeed, was she some kind of con artist? A complete lunatic? Another sexually frustrated nun? An actual prophet who could communicate with God, somehow? Or maybe it was a combination of all this all together. Well, you won’t get any easy answer which was the movie’s biggest strength but also its weakness. Indeed, at the end, all the other characters’s thoughts, feelings and motivations were pretty clear but Benedetta remained an impenetrable wall which was slightly frustrating and, yet, it made her rather fascinating. I also think that the whole lesbian relationship was not very well linked with her religious ‘awakening’. The best thing that I can think of was that, by being touched by Bartolomea’s love, she was then more able to get in touch with God? Or maybe, after all these years of sexual abstinence, it pretty much blew up her fragile mind? Anyway, to conclude, even if it wasn’t flawless, Verhoeven delivered here another intense roller coaster and it is definitely worth a look, especially if you’re interested in this director’s work.