The Witcher: Nightmare of the Wolf review
22 Views 1 Comments
1

It is a nightmare that bad writers get work. 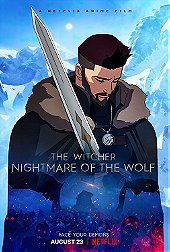 English is not my native language so I apologize for the errors that are bound to exist.

Is a bad film.

1. Witcher training: Is fucking ridiculously dumb. They trow a bunch of kids into a swamp full with monsters, the majority are fucking slaughter, because of course they are. But, the ones that survived are “Witcher material”. That´s so stupid. How about you trained them correctly until they are said material. I mean, fucking hell. One of them lose his arm, it if wasn't for that, he will be 100%.

Not all of them are surviving the herbs, keep them alive until then.

Is such a horrible system that has no reason to exist.

We don’t even get to see how the shit ended.

And, by the way, they make them trained with real swords, instead of practice ones. Stop doing that, please.

2. Tetra: She creates a big problem. The funny thing is that we can eliminate one of her scenes and everything gets better. She's is shown fucking a mountain up. If she's that strong, who can face her? Not many people, no one in the film. And yet, she loses, no because she gets outsmarted or anything like that, is just that she's really stupid.

Vesemir gets put into a trance or illusion, where, obviously, he’s defenseless. And yet, nobody attacks him, not even her that hates him so much.
Is not like it was a random fight or something, they went there specifically to kill Witchers.

Yes, her magic takes time, but not that much, and he was under the illusion far longer than the 45 seconds that it took her to dance before. And then, he gets put under another one, given her more time.

Yes, Tetra could have taken down Kaer Morhen using that magic, with the protection of the monster and the humans as meat shields (makes no sense that they are working together but okey) and the time that they can make for her.
But, I think that she probably prefers to kill them directly, after all, she really hates them.

Although, taking into account how incompetent the writers are, is more likely that they did not thought about it. So, I’m writing the film for them, because there is no line that I can point to. But, I still think is fair to assume that.

Now, her motivation … Yes, it makes sense, but is so childish. Instead of hating that particular Witcher, she hates all of them. And that's the easiest thing to write for a story like this, and is lazy and lacks nuance and is fucking boring.

That kind of stuff works better with a character that learns that not all are the same.

Racism is not good, kids.

3. The other big problem is Deglan. The fact that he makes chimeras is the only reason there’s a plot. Is a dangerous decision because its screams that there’s an intelligence behind it. Is very suspicious. Just produce monsters in mass, that's going to be easier to hide.

Is not necessary to make super beast, but if he really wants to make them more dangerous, he could just make them a bit bigger, improve the claws and shit, stuff like that. People can assume that they “evolve” for some reason, if they even notice it. Or perhaps there bigger because they been eating better or some shit. I don't know, I'm not a biologist!

Deglan didn’t strike me as a retard, I assume there’s a good reason as to why he is the leader. It seems to me is just a reason to have a plot, and that's contrived and bad writing.

Maybe Tetra is the one making monster and incriminating Witchers, that way having a reason to eliminate them, getting her revenge.
That if you want to keep that plot, she could just be a Witcher hunter.

4. As an extra, Kitsu. She’s not so much a character, but a plot device. She’s just there to let them know about the mutations and to be use to bring all those monsters to Kaer Mohren. She appears out of nowhere, we never get to know her normal to like her and stuff. Her only reason to exist is to be useful for the plot. And that's lame.

And that's it. There are good things, like some relationships (Illyana is good) and the animation. The fact that a lot of the monster aren’t stupid and easy to kill like the ones in Castleshit. The villains at least have an understandable motivation, even if there’s not much to them as people.

Vesemir has a character and a thing that could be explored, but it not really explored. You know, his love of coin as the only thing that matters. Is not the case, he clearly cares about other stuff. But they don’t give him a choice between money and a moral act. Or a regret about a time he chose coins instead of saving someone or a relationship. Is not like his deeply sad and thinks a lot about Illyana. There’s no scene in which he regrets the life decision he took.

Is not like there’s nothing, but is not enough. The movie is too fucking short.

And Tetra also suffers, because there’s the thing about believing she’s clean of flaws and stuff, but is the one scene, and nothing after that. Her motivation is entirely emotional and there’s not any exploration of her as a person.

I can’t really empathize with these people; I barely know them.

PS: The Gerald thing was laughable.