On the Basis of Sex review
5 Views
0 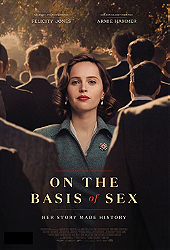 Since Ruth Bader Ginsburg seemed to be a fascinating woman and since this movie was available on Netflix, I was quite eager to check it out. Well, I wonder what a better director than Mimi Leder could have done with such strong material. I mean, it’s not that she delivered a terrible movie but, to be honest, it was only decent and not much more than that. Indeed, the first part was especially rather clunky. Sure, it made sense to start the story at the prestigious Harvard Law School but, then, after a few minutes, they actually already moved on with something else. Same thing with her husband’s battle against cancer, one moment, it seemed to be a death sentence, and a moment later, he was actually already cured. I understand that they tried to be comprehensive regarding her life but, as a result, they compressed too much information in such a short time period. Eventually, you might wonder if a mini-series wouldn’t have been more effective to properly develop all these important moments of her life. Seriously, they didn’t even touch the period during which she became judge and was eventually appointed to the U.S. Supreme Court. Fortunately, the whole thing finally became more focused from the moment she started to work on the Charles Moritz case. Concerning the cast, Felicity Jones was also a fine choice and she delivered another strong performance here. She also had a decent chemistry with Armie Hammer who made the most of a character who could have been rather thankless. Eventually, even though they hammered the fact that Ginsburg’s work had a huge impact (it still did actually), eventually, even though gender discrimination is not lawful anymore, it is still everywhere in our everyday life, in the US but also everywhere else in the world. Anyway, to conclude, in spite of its flaws, it was still a decent watch and it is definitely worth a look, especially if you want to learn more about one of the most inspiring women ever.