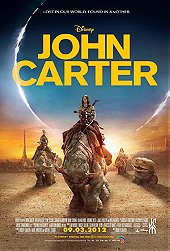 Thrilling and utterly fascinating. When was the last time you entered a movie theatre and became engrossed in every aspect of the featured film, even if it didn’t execute entirely well on all cylinders. John Carter lies in its rich visuals and production design, solid performances, a compelling storyline and terrific musical score.

Yet another Disney delivered on – even if general audiences held mixed feelings. John Carter is much like Legacy, in that the complexity of the action set piece boggles down an otherwise fine piece of cinema that may seem niche in its supposedly target-demographic of young males, but undeniable heart trumps all cynicism.

I thoroughly enjoyed it, bit long 132 minutes but all the same most enjoyable film to watch. Well directed by Andrew Stanton.