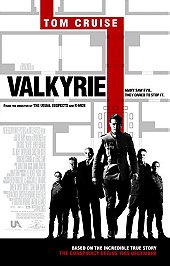 "Hitler is dead. Operation Valkyrie is in effect."


Valkyrie is a solid World War II espionage thriller, conveying one of the most staggering true stories in modern history. This is a motion picture infused with a rare story regarding the German Resistance that primarily concentrates on the overlooked heroism of officers and soldiers who actively fought against Adolf Hitler and his regime from within ranks of power. Directed by Bryan Singer (a man blessed with a virtually unbroken run of impressive work; his previous films including The Usual Suspects, X-Men and Superman Returns), Valkyrie manages to thrill and entertain the mass market, but it seems hardly worth the wait and effort. Singer's film is coated in an inevitable layer of thick Hollywood gloss, and is also lacking in vital depth. Screenwriters Christopher McQuarrie and Nathan Alexander employ the historical facts of this remarkable true story (told rather faithfully) to construct the flick, but it comes across as well-oiled Hollywood entertainment rather than a sensationalist chapter of WWII. While not a bad film by any means, Valkyrie would've carried far more clout if it had emerged from the confident German film industry (with home-grown actors and a director to match) as opposed to the tired mills of Hollywood.

Sour industry buzz intensely enveloped Valkyrie as it was slammed unjustly since production commenced in 2007, facing augmented hostility that greeted the shifting release dates as well as the trailers that underlined the bewildering cocktail of British and American accents meant to represent the resistance movement inside the Third Reich. It turns out this bad press was merely conjecture; battling the odds and winning, Singer has handsomely directed this engaging, intense World War II thriller. It's not as bad as the negative pre-hype suggested, but Valkyrie still had the potential to be a superior flick.

The film covers a span of roughly 18 months, from early 1943 until the fateful final day. Valkyrie provides an examination of the workings of the German Resistance movement, wherein high-ranking officials with various levels of access to Hitler collaborate to bring to fruition a plot to assassinate their Fuhrer.
With Germany's loss in the war a predetermined conclusion to nearly everyone except for Hitler himself, these high-ranking German officers valiantly conspire to murder their leader, replace the government as peacefully as possible and implement a new regime during which they'd negotiate a peace. Consequently, a peace would spare the loss of more German soldiers and repair what's left of their country's legacy. The cunning idea is to use the German government's own emergency plan (dubbed Operation Valkyrie) against it. With each officer in the group assigned a different role, they propose to plant a bomb inside the Wolf's Lair (an enclosed bunker where high security meetings were held), killing Hitler and his staff before overthrowing the Nazi government from the inside. However, paranoia grips the schemers as success grows nearer. As anyone with a basic knowledge of World War II knows, Hitler would later die by his own hand.

"The point of replacing Hitler is to negotiate the truce with the Allies. The Allies, I suspect would be more amenable to a truce if we offer it to them before they get to fucking Berlin!"

The protagonist of the story, Colonel Claus von Stauffenberg (Cruise), initially suffers serious wounds in Africa. Despite (or perhaps owing to) his injuries, Stauffenberg is recruited into the resistance, being introduced to the secret circle of conscientious objectors. The plan itself is complicated and never clearly explained by the characters (dialogue is fairly stilted), but the basic details are straightforward enough. This is a fascinating story to preserve on film as it's all-too-often neglected. It's curious to note, however, that the film eschews the details of the most famous casualty of the July 20 assassination attempt - Field Marshal Rommel, who was mistakenly implicated and committed suicide as a result. This oversight is likely owing to time constraints, but it's an unfortunate exclusion as it would have shown how far and wide the net was spread to obliterate resistance within the military.


"We have to show the world that not all of us are like him. Otherwise, this will always be Hitler's Germany."

The extremely obvious (and well-known) outcome of the story barely affects our immersion. Director Singer competently brews a substantial amount of suspense. A chain of near misses and tense decisions pinch a viewer with anxiety. Following a fairly sluggish opening act, Valkyrie transforms into a taut assassination game, and the suspense levels continue to elevate throughout the second half when the implementation of Operation Valkyrie develops into a battle of bluff between Stauffenberg's rebels and Hitler's media machine. The performances are especially strong here; each man conflicted as they witness the monster they believe they've killed sprout another head and pursue them. The outcomes of such biographical or historical films as JFK, World Trade Center and Malcolm X are also well known but it doesn't detract from the brilliance of those films. Therefore, why should Valkyrie be held to a different and stricter standard?

One of the most widespread criticisms is perhaps the most valid; the cast never speak in German accents, nor do they speak German. Nazi officials articulate faultless English while writing in German. The problem is addressed during the opening few minutes, during which German titles transform into English titles, and Tom Cruise begins talking in German before beginning to speak English. The implication is that the characters do speak German, but for the sake of being a slice of Westernised entertainment a viewer hears them speaking English (a tactic first employed in The Hunt for Red October). Nevertheless, this is a fault too blatant and baffling, and it's consequently difficult to overlook. Once again, German filmmakers should've committed this ignored piece of history to celluloid.


"I'm a soldier, but in serving my country, I have betrayed my conscience."

In different hands, Valkyrie would've been a deep examination of the people involved, their motives and fears, and maybe even their personal lives. If Valkyrie provided further insight into the lives of these fascinating historical figures, it'd be a more thoughtful and therefore better film. Stauffenberg may have been maimed in the war, but his disenchantment with Hitler predated his injuries, and the film hardly explores this. Instead the film spends lots of time trying to prove that he's a great man. However, whether he was nice or mean is beside the point in the long view. Screenwriters McQuarrie and Alexander needed to dig into Stauffenberg's character and explore the reason why he decided to take such risks. They instead give Cruise the WWII equivalent of his character from Mission: Impossible.
Also, were the co-conspirators simply patriotic Germans, or did they have a deeper motivation for committing treason? With a few exceptions, we never really know. Valkyrie simply feels too underdone, as if heavily cut in the editing room. It seems to have been re-cut to be less of an Oscar-bait drama and more of a popcorn thriller; while serviceable as the latter, it might have been a better film as the former.

Singer dives into the material with plenty of zeal, moulding the assassination plot into an eye-catching, jaw-clenching movement of urgency, utilising the characters as chess pawns on the board game of Germany's future. Singer's work has generated a well-directed chronicle of misbegotten patriotism, with emphasis on sharply angled Nazi ornamentation, beautifully photographed by Newton Thomas Sigel. Several scenes were filmed on location in Berlin (using many locations where actual events occurred, including the Benderblock). In some instances where a certain location no longer existed, it was meticulously recreated. However, what's missing here (but effortlessly captured in films like Black Book) is any sense of the horrors of war, the maniacal evil of the Nazi regime, and the corrosive effect on civilians. The Berlin depicted here is too pristine and glossy...it's unmistakably a Hollywood production. The grittiness and brilliance of 2004's Der Undertang (Downfall) should have pervaded a film covering this source material.

David Bamber's physical resemblance to Adolf Hitler is effective enough for the few scenes in which he features, but it almost goes without saying that he doesn't come close to Bruno Ganz's astonishing portrayal of the dictator in Downfall (which was a far more gripping and riveting flick, in no small part because of Ganz).
Tom Cruise is adequate as Colonel Claus von Stauffenberg. Much controversy was sparked about Cruise taking on such a role, to the point that the German government forbade filming in their country due to his scientology cult (eventually permission was granted). Cruise is surprisingly strong, infusing his performance with a crucial level of emotionality. The actor never entirely immerses himself into the character, but his appearance is ideal. If only Cruise delivered dialogue in a more German fashion...
Once you accept English Nazis, you can easily accept the great cast - including Bill Nighy, Terence Stamp and Kenneth Branagh who play old-school soldiers with stiff upper lips. Tom Wilkinson is a slimy delight as a Nazi official who turns a blind eye to the operation as opposed to actually helping. Eddie Izzard, Kevin McNally and Christian Berkel also appear (among others), and all hit their marks delightfully.
Carice van Houten, who was so remarkable in the WWII drama Black Book, is given minor screen-time as Stauffenberg's wife. (It's worth noting that another Black Book cast member, Waldemar Kobus, also appears in Valkyrie. In the former film he played a piggish Nazi officer, and here he's a police chief who collaborates with the resistance.)

Taken merely as a genre piece, Valkyrie is an engaging but incomplete thriller. Its illustrious cast do their jobs adequately, but the story could have benefitted from further insight into the men who tried to kill Hitler. At the end of the day it's a tense, competently-crafted thriller that accurately communicates a story of bravery and betrayal. But when Hollywood has the last word, something dies. It ultimately feels like the story has been taken advantage of, and skilfully repackaged as entertainment for money purposes.