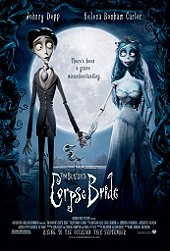 “Corpse Bride” is a macabre fairy tale musical filled with dancing skeletons, a maggot who serves as the “Corpse Bride” equivalent of Jiminy Cricket, and rollicking musical numbers from ex-Oingo Boingo front man and frequent Tim Burton collaborator, Danny Elfman. But above all else, “Corpse Bride” is an enchanting wild ride through the land of the dead, infused with Tim Burton’s unique brand of wit and humor, and brought to life by the vocal talents of Johnny Depp, Helena Bonham Carter, and Emily Watson.
Burton, co-director Mike Johnson, and screenwriters John August, Caroline Thompson and Pamela Pettler don’t bother burying the fact “Corpse Bride” is all about love. Sure, there are dance numbers and adult-oriented jokes, but the fact that this is actually a moving romantic tale is always kept front and center.

After being attacked and killed while waiting for her fiancée in a dark, scary forest, the Corpse Bride is bound and determined to never, ever be left again. An opportunity for everlasting happiness suddenly presents itself when Victor, a humble, shy, and extremely uncertain of himself groom-to-be wanders into her forest while practicing his wedding vows.

Victor finally gets the lines down pat but soon discovers that’s not necessarily a good thing. The wedding ring he intended to place on his bride-to-be’s finger winds up on the protruding skeletal finger of the Corpse Bride. That act, when taken in concert with Victor’s uttered vows, is enough to pull the Corpse Bride up out of the frozen ground and into Victor’s surprised embraced. Victor may have wanted to get married, but he definitely didn’t want to take a wedding dress-clad skeleton with an eyeball that pops out at the most inopportune times as his wedded wife.

Because “Corpse Bride” is actually a feel-good love story only barely disguised as a gothic horror film, Burton and Co throw in plenty of jokes but never let the mood get too dark. Though I still consider “Corpse Bride” a bit too scary for kids, there were a couple in the preview audience who seemed to really get into the dance numbers and the adorable skeleton dog (it does sound weird but he is a cutie - even without fur).

I love the fact Burton chose to make the land of the dead vibrant and alive while portraying the world inhabited by the living as one of dull colors, gloomy surroundings and repressed people. The dead heads are much more fun and lively than those with still-beating hearts. While the majority of those still living care more about money and material possessions, in the land of the dead friends are loyal and people (read ‘skeletons’) care about what happens to each other.

“Corpse Bride” looks absolutely gorgeous. The colors are crisp and clean and practically leap off the screen. Coming in at around 85 minutes, “Corpse Bride” never drags but instead moves swiftly through the story, delivering laughs along with a sweet message about the power of love.