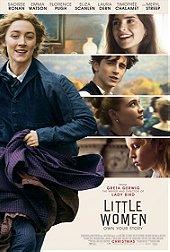 I wasn’t really dying to see another adaptation of this classic US novel but since it had been very well received, I thought I might as well check it out. Well, to be honest, I still don’t think it is such a great story (I might have to read the book at some point to really judge it though) but Greta Gerwig definitely made the most of it. Concerning the directing and the writing, Gerwig had been really praised for her work but, to be honest, I had some mixed feelings. I mean, on one hand, it was clearly an ambitious project but, on the other hand, what was so ambitious about adapting a classic book which had been adapted so many times before? Concerning the back-and-forth in time, it is an overused gimmick which I see way too often nowadays and, in this case, it was only mildly effective. Anyway, something neat thing about this story is that it always allowed the makers to assemble an all-star female cast and this version certainly didn’t disappoint on that level (Saoirse Ronan, Emma Watson, Florence Pugh, Laura Dern, Meryl Streep, Eliza Scanlen). To be honest, Watson’s and Scalen’s roles turned out to be rather thankless as they were not really fleshed out and it shows that this story might work better as a mini-series to have more running time to properly develop each sister. However, there is no doubt that Saoirse Ronan and Florence Pugh were both quite impressive. I think I had a slight preference for Pugh as she was so convincing playing the same character at two very different stages of her life. Eventually, I have to admit that these characters were actually all really neat and the relationship between these sisters was just really sweet and entertaining to behold. I wasn’t really so sure about their relationship with the male characters though. Indeed, there was not much time to explain why Meg thought that John Brooke was so amazing and the switch made by Laurie from Jo to Amy still felt rather jarring. Anyway, to conclude, even if I think it was slightly overrated, it was still a decent watch and it is definitely worth a look, especially if you like the genre.