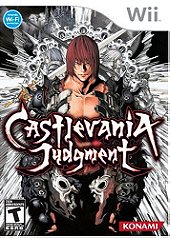 So, I'll get this out of the way now and say that I'm a long time fan of the Castlevania series. I wanted so much to like this game. I tried to look past the constant pandering to anime fan groups and enjoy beating the crap out of my favourite characters, but it gets so hard.

First, the platform. I like that it was released on the wii, but really only for one reason; it's cheap. I'm glad that I don't have to go out and buy a $500 PS3 in order to play the games I want. That aside, there are certain things about the wii that make it a marketable system for gaming. The wii is well designed for user interactivity with the wireless controllers and various add-ons. It can connect to the DS (which features 3 excellent Castlevania games to date). And lastly the wii is capable of a moderately high level of graphics (something it unfortunately has yet to tap). This game...ignores two of those points entirely and wastes the third. The controls do not offer a feeling of interactivity. The wii remote (which can only be used with the nun-chuck or the classic controller inserts) is far too clunky to operate with the control structure. The graphics are presentable, but really, they aren't better than the Soul Calibur series released on the PS2. Then lastly there is the DS connection; With a copy of 'Castlevania: Order of Ecclesia' you can link to Judgement and unlock a few extra features. While the extras you unlock in your DS are quite useful, the extras you unlock in Judgement are really quite trivial.

The controls; these really need to be discussed in more depth. With the wii remote the player should be able to enjoy another dimension of play via the motion sensors. Notice I emphasize should. The controls in Judgement really only offer you one aspect of motion sensor controlling, which is that you attack by shaking your controller. Now don't mistake this for something like Twilight Princess where you control the weapon (to a degree) with the remote. In place of using a single attack button, the programmers use any motion as that one button. Overall, I found the wii remote just too clunky to stand for more than 20 minutes, so I plugged in a NGC controller and was on my way. Now again, don't confuse what I'm saying to mean that the NGC controller overcomes the poor handling, its just preferable to the wii remote. Using the Game Cube controller you use 6 of the 7 buttons (not counting start to pause) and both thumb sticks, but not the D-pad. This sounds pretty reasonable, well suited to this particular controller. Now comes how the buttons work. You have 1 attack button, 1 combo button, 1 jump button, 1 guard button, 1 sub weapon button, and 1 button for specials that I'll discuss in depth later; you move with your thumb stick and dodge with your C-stick. The problem with the later two is that you can't control the camera, which often leaves you blind in a large 3D arena; also, partly due to the camera problem and partly due to poor design, the C-stick dodge does not necessarily move where you would think it would. Now back to buttons, you can attack essentially in three ways: Basic attack, attack + combo button, attack + guard. There is a bit more to it than that, but those are the bulk of it. The guard attack is slow, but tends to cut through blocks. The standard attack is essentially useless unless properly paired with the combo button. The combo button does nothing on it's own; it can be charged and paired with the attack button, or used after the attack button to form combos. The guard is a bit slow to respond, but is pretty solid. Guards can be broken, but there doesn't seem to be much rhyme or reason to that other than using the guard + attack. The jump is straight forward, most characters have double jumps. The sub-weapons are kind of cool; there are a limited selection for each character, but realistically there are usually only 2 good ones per set. And lastly there is the that Special button...oh that button. This is cruise control. This button is not meant to exist in fighters. If you have a full special gauge (which is most of the time) you can use a finisher type attack. If you can land the strike (which isn't too hard most of the time) you enter a looooong, highly animated cut scene that seems to be cut right from an anime series like Inuyasha or DBZ. After going to the bath room and getting a coffee to avoid listening to 4-6 corny ending lines you will find your opponent on the ground with 50% less health than they had. I know that sounds like an exaggeration but unfortunately it isn't. Special attacks deliver exactly 50% of one health bar, meaning 90% of the time they end the battle.

For Castlevania fans, the graphics play a part in this game. If we are going to play our favourite series in 3D, we want the characters and the locations to look right. Well, the levels are fairly well done, I'll grant that much. The characters on the other hand...well at least Shanoa looks fairly close to what she should. Overall I've got complaints for just about every character design in this game, and while I could list off every one, I'll focus on just a few. Simon...where the hell did he come from, because the Simon I remember wasn't a red head...and why the hell too much like Voldo. I could go on, but I won't. Next major complaint about character graphics is the costumes. They start with a system somewhere between Tekken 5 and Street Fighter 2. Like SF2 the characters have 2 alternate colours, and like Tekken 5 they offer 2 outfits and customizable clones of each. The difference from that system are as follows: Accessories highly limited, no choice in colours, no point-buy system, both costumes are exactly the same except for colour.

Game play, this could be a review all in itself, but I'll try and keep it concise. The game breaks down into Versus, Story, Arcade, Survival and Castle modes. Versus is straight forward, no explanation needed. Arcade plays like a standard fighter, but with all of this game's existing faults. Survival is like the survival mode most fighters have, for those who aren't familiar, the goal is to win as many consecutive fights as possible without losing. The interesting points are Story and Castle. Castle mode is somewhat like Weapon Master mode in Soul Calibur 2 in that you move along a map-like-plane fighting in handicapped battles in order to earn bonuses. If the bonuses were more worth while this might seem more fun, but in the end it's kind of repetitive. The challenges are all pretty much the same, either defeat a slightly augmented opponent, destroy X number of objects/collect X number of items, defeat opponent with specific method or make X hit combo. Overall, it just seemed rushed. Lastly there's story mode. At first play this is instantly a pain because you are highly limited with what characters you can choose from. As you play with the characters available, more become available. When you beat it with the first 13 characters (all but Aeon) you earn "True" story mode. At this point I'm excited, you get 3 meagre story segments in your standard story mode fights, so logically with true story mode you get a new depth of the characters story right? NO! True Story mode is precisely the same as the old story mode except after your third story fight, instead of rolling the credits, you fight Aeon again, upon beating him, you fight the boss of the game "Time Reaper"; a character I assume most of us have never heard of, but apparently exists in the Kid Dracula series which is loosely tied to Castlevania. Upon beating Time Reaper you get a small segment of text explaining the characters epilogue a little bit. I felt a little disappointed that that was all, but mostly I just kept wondering where the ending videos are. I mean, Tekken 3 on the Play Station had ending videos, this is the wii, how hard can it be to do up a little epilogue video? They spent the time animating 15 second special attack videos, but they couldn't come up with anything plot related? It just came off as a disappointment really. My last complaint is the unlockable content. The selection of characters to unlock are limited, and there are no secret or bonus characters that weren't initially advertised. There are no alternate costumes, just a second colour selection. The accessories are a disappointment. The sound test and character art galleries simply don't appeal to me, and I assume to most avid players. Overall, they just didn't program adequate incentive to keep playing.

Cons:
-selection of characters could have been more diverse
-character design ignored source material atrociously
-no alternate costumes
-poor controls
-the 'Special Attacks' with pointless cut scenes and ridiculous damage
-lack of plot depth
-lack of meaningful unlockable content
-minor bugs in fighting engine
-too much like an anime series, not enough like Castlevania