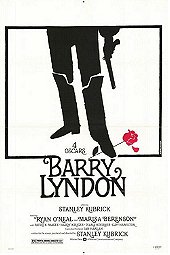 "It would require a great philosopher and historian to explain the causes of the famous Seven Years' War in which Europe was engaged and in which Barry's regiment was now on its way to take part. Let it suffice to say, that England and Prussia were allies and at war against the French, the Swedes, the Russians and the Austrians."


Stanley Kubrick earned his directorial chops following the phenomenal success of his breakthrough, landmark sci-fi masterpiece 2001: A Space Odyssey. For this particular motion picture, Kubrick endeavoured to tell a story almost entirely visually (accompanied by classical orchestral background music). This technique succeeded, and every frame is consequently downright stunning. In fact, 2001 is such a beautiful film that one could take any frame at random and hang it up on one's wall. With Barry Lyndon, Kubrick attempts a very similar movie. Both the story and setting is undoubtedly different, with deeper characterisations and far more dialogue. Yet Kubrick's underlying objective was identical: create gorgeous pictures worthy of being hung on a wall. Kubrick's superb version of William Makepeace Thackeray's first novel is meticulous and philosophically invigorating, but it will leave audiences unmoved on a profound emotional level.

Although Barry Lyndon offers little excitement or action, Kubrick's primary aim was to recreate the ambiance of an 18th century painting. By detailing each shot with a multitude of intricate niceties, Kubrick asks an audience to carefully examine them, ponder them, and appreciate them - not necessarily for what they symbolise, but for themselves. This creates a unique, if decidedly slow-paced, cinematic experience.

Shot over a two-year span (300 days all told) in order for Kubrick's proverbial obsessive detail to pervade each frame, Barry Lyndon is a costume epic that appears to be operating under a spell. Thus the actors become pieces in a chess game - exquisite philosophical compositions to be moved hither and thither as automatons more than humans. The performances of Ryan O'Neal and Marisa Berenson are more like echoes; carefully and ponderously shifting from A to B, their lines becoming secondary. Their tableau - haunted by lush paintings - is so ornately decorated it almost becomes static. This swashbuckling landscape is bathed in deep melancholy. It's a world functioning almost subliminally, allowing an audience to absorb the images as opposed to simply beholding them. Barry Lyndon is so divorced from emotion, and therefore hard to measure on an entertainment scale. The result is pure art...art that all but locks the watcher out. It's awfully lengthy and periodically gruelling at a running time of three hours, but never is the film boring per se.

"No lad who has liberty for the first time, and twenty guineas in his pocket, is very sad, and Barry rode towards Dublin thinking not so much of the kind mother left alone, and of the home behind him, but of tomorrow, and all the wonders it would bring."

Barry Lyndon is based on William Makepeace Thackeray's The Luck of Barry Lyndon - later revised as The Memoirs of Barry Lyndon. Set in the 18th century, the film is a picaresque adventure - a satire of an upper-class society that chronicles the exploits of a roguish hero of the common classes. Young Redmond Barry (O'Neal) is an Irish commoner in his late teens when the story commences during the 1750s. By the film's dénouement, Barry is well into his fifties. Barry Lyndon consists of separate vignettes rather than an unbroken narrative; Kubrick's objective to deliver an epic on the subject of the protagonist in a style akin to Gone with the Wind or Lawrence of Arabia. Each vignette on the anti-hero's life brings adventure, fame, fortune or ruin. The film is narrated in a deadpan, folk-story manner by esteemed British actor Michael Hordern.

The initial vignettes of Barry Lyndon chronicle the character's origins. As a teenager, Redmond Barry is in love with his cousin Nora (Hamilton). When Nora becomes engaged to a captain in the British army (Rossiter), Barry becomes jealous. Following a successful duel, the young Irish rogue is advised to leave the area. With no money and little alternatives, Barry joins the army and fights in the Seven Years' War. He deserts the army, but is subsequently abducted into the Prussian army. Through a series of political manoeuvres upon the war's conclusion, Barry befriends wealthy nobleman and gambler Chevalier de Balibari (Magee). Barry then lies, dupes, duels and seduces his way up the social ladder of the 18th century aristocracy. He marries Lady Lyndon (Berenson) for financial advantage. He also inherits a vast estate and has a child. But with Barry Lyndon's meteoric rise to the top comes the seeds of his downfall. The second half is composed of vignettes recounting Redmond Barry's social + financial collapse through philandering, gambling, and the drink as well as a vengeful enemy.


"Barry's first taste of battle was only a skirmish against a small rearguard of Frenchmen who occupied an orchard beside a road down which, a few hours later, the English main force would wish to pass. Though this encounter is not recorded in any history books, it was memorable enough for those who took part."

Following 2001: A Space Odyssey, Stanley Kubrick launched development for a motion picture about Napoleon Bonaparte. During pre-production, however, Dino De Laurentiis' Waterloo (a movie recounting Napoleon's defeat at Waterloo) crawled out and died at the box office. Consequently, Kubrick's financiers cut funding for his proposed project. Having pumped considerable time and effort into the development of his Napoleon epic, Kubrick was furious. With no alternative, the director turned his attention to his next film - A Clockwork Orange. Following A Clockwork Orange, Kubrick started developing Barry Lyndon (in part to take advantage of the copious research Kubrick had conducted for his aborted Napoleon picture). Stanley Kubrick wonderfully adapted Thackeray's novel for the big screen. In the grand scheme of things, though, not much actually transpires. A single line from the script appears to be translated into multiple minutes of screen-time. The final duelling scene, for example, is filled with ponderous pauses (it even took 42 days to edit the sequence!) and barely a page of dialogue as the director fashions a ten-minute scene intermingling intensity and pathos. Director Kubrick was certainly in no rush as he spent a total of 300 days filming the movie. Indeed production was forced to be shifted from Ireland to England once Kubrick was informed that his name was on an IRA hit-list for filming a movie about English soldiers in Ireland.

Kubrick's meticulous screenplay comes alive through the remarkable Oscar-winning cinematography of John Alcott. In order to truly capture the colour palette of an 18th century painting, special lenses from NASA were fitted to traditional cameras. Reportedly, these lenses allowed night scenes to be filmed by natural candlelight with no additional artificial light. To date, Barry Lyndon contains the largest aperture in filmic history. Contrary to legend, though, artificial light was utilised from time to time.
The legendary Ken Adam won an Oscar for his extravagant, aesthetically beautiful production design. The combination of Adam's production design with Alcott's cinematography is breathtaking and intoxicating. On top of this, the costumes look truly stunning. Legend has it the costumes are 100% authentic, yet this is only partially true. A majority of the costumes were created specifically for the production. In addition, costume designer Milena Canonero purchased a number of authentic costumes from the 18th century at an auction. The visuals are amazing no matter where you turn. From vividly-uniformed soldiers to candle-lit interiors and extensive period estates, every shot is a masterpiece of colour, composition, depth, and detail - indeed, the entire film is a tour de force of 18th century décor.
The score - always integral to Kubrick's vision - is also reminiscent of the period. It's a subtle coalition of Irish folk tunes by The Chieftains and Schubert's E-minor Trio.

As always, Kubrick delves into provocative themes - here he explores people being used for selfish purposes and allowing themselves to be used. The writer-director was never too positive in any of his films with the egocentric, callous, ulterior motives of humankind. This philosophy is manifested in the character of Barry Lyndon - the social-climbing fortune hunter - who's only too pleased to be a business partner or a trophy husband in order to achieve his goals. Barry Lyndon isn't just a costume epic (like Full Metal Jacket isn't just a war film, nor is The Shining a horror film); instead it's a movie working on various extra-narrative levels. It seems Kubrick was endeavouring to illustrate the difficulty of man striving to become the ruler of his own world. The characters are all aspiring to greatness, but can never elude destiny. Literally crushed by the totalising borders of the film, the characters can never gravitate outside of the world that has been devised and outlined for them. Barry Lyndon is full of acerbic social critique which is merged with Kubrick's experimental distancing style. Certainly not for all tastes, but it's definitely worth a watch.

Kubrick's Barry Lyndon is entirely sedate; his objective to stimulate the eye more than the heart. Moreover, the characters - especially the protagonist, played by Ryan O'Neal - are designed to be distant. In over three hours of screen-time, O'Neal hardly registers an expression on his face. Perhaps the actor is too soft spoken and introverted to convince as Barry, but O'Neal's performance is a masterful instance of less-as-more; his litheness in duelling sequences contrasted with the robotic, dysfunctional actions as he seduces Lady Lyndon.
As O'Neal's co-star, Marisa Berenson is superb. As a matter of fact, across the board there isn't a faulty performance at all. The lack of emotional involvement is the only lethal flaw - it may have been deliberate, but at its extreme length it appears to lack a certain spark.

Barry Lyndon is a gloriously ponderous, sweeping historical epic that serenely moves through the life and times of Redmond Barry. Of all the entries to the Kubrick canon, this flick is perhaps in most need of re-examination. Barry Lyndon is a forgotten gem; it's unfairly overlooked, and unfortunately it's not a film Kubrick is remembered for. The film is probably too long, but it's a beautiful eye pleaser despite its pedestrian pacing. Kubrick's camera leisurely scans an assortment of palaces, gardens, woods, lakes, streams, fields, lagoons, statuary, grand buildings, manicured lawns, reflecting pools, and sumptuous rooms. To guarantee eyes are kept on the scenery, the director deliberately diffuses the individuality of the characters. But in 2001: A Space Odyssey Kubrick kept his audience rapt with a constant stream of innovative images and fantastical experiences. In Barry Lyndon he is only able to produce gorgeous images of an 18th century European landscape, coupled with inaccessible characters. Although the cinematography is wonderful, it's not always sufficient to sustain the extreme three-hour length.


"Gentlemen may talk of the age of chivalry, but remember the ploughmen, poachers and pickpockets whom they lead. It is with these sad instruments that your great warriors and kings have been doing their murderous work in the world."