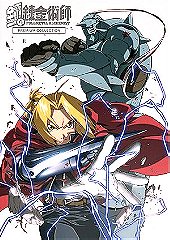 This is a difficult comparison for me. Brotherhood stands out as being the much higher quality anime, with much better animation, better character origins and less glaring plot wholes.

But Fullmetal Alchemist, even with it's sometimes nonsensical parts, has touched me in a much more profound way. Even with its rushed ending and completely different story arc from the source material, Fullmetal Alchemist stands out as being the more emotionally engaging and unique experience. However, I may also be biased because the first series was my first anime that I watched on its original run when I was 11.

While Brotherhood is certainly an emotionally charged, heart-warming series as well, there is something that I can't really explain about the first series that just hits the right chord with me.

One of the things I noticed was that the comedy was much more present in Brotherhood, which, in my opinion, hindered the drama at many points. Granted, it was funny as hell, but really ticked me off at times. From what I understand, this is closer to the source manga in which Edward and Alphonse are much more closed off emotionally and more hesitant to become sentimental compared to the first Fullmetal. While this does follow the original author's intentions, the few moments that break this mold in Fullmetal Alchemist are among some of the most poignent I have ever seen.

The only two major characters that had differences worth discussing are Ed and Al.

The Ed in Fullmetal Alchemist is much more realistically immature and weak at times, though admitedly his cocksure attitude can be more annoying than charming at times. The Ed in Brotherhood is still cocksure, but he is more humorous. Though I think he is stronger-willed in Brotherhood, there's also a part of him that seems more compassionate. But there is also something in him that seems also psyhotic and pathetic. It's difficult to explain, but goes without saying that the Brotherhood Ed has more depth.

What I can't explain with Ed I can definitely pick apart with Al. The main irk I have here is with him. In Fullmetal Alchemist, Al is usually restricted to the "damsel in distress" role. However many times Al needs to be rescued is beyond me, and his main purpose seems to be getting captured and becoming a plot device. His presence is simply frustrating. However, the role he plays in Brotherhood is very obviously different from the get-go. He serves a purpose, and shows himself to be a very strong, knowledgeable opponent while also serving as the compassionate parent-figure, all while only getting himself captured once or twice. Hallelujah.

All of the other characters remain basically the same in both series, and thank the heavens for that. They are all so immersive, well-rounded and 3-D. You WILL cry when one of them dies, even if it is the most ghastly of the baddies.

It may not seem to matter much, but it stood out to me: the music. I am always saying that if Brotherhood had the first series soundtrack, it would be perfect. This is obviously an overstatement, but it gets the point across. The soundtrack in Fullmetal Alchemist is simply beautiful. Almost every track is real orchestra as opposed to midi, and as a sound design nut this is really important to me. While Brotherhood's music is good, it's easily forgettable and even repeatative at times. This made a huge difference in the more emotional scenes, and was sometimes the difference between me bawling my eyes out or barely sheading a tear. The greatest example of this was Hughes's death scene. There was something about the melodramatic piano in Fullmetal Alchemist that just twisted my stomach and prepared me to sob at the following scenes. Brotherhood's music just didn't hit me the same way and I couldn't get quite as emotional.

Of course one of the things I must discuss are the endings to the two series. Obviously massive spoilers are ahead, so be warned.

One of the biggest complaints about Fullmetal Alchemist is the change from source material story to original story about 1/3 of the way through. While this was with consent with the original mangaka, there are a good amount of people who were unhappy with the ending. There were a lot of people that thought the "different dimensions" aspect was strange and contrived, which I can understand. This ending also relies a lot on some noticable plot devices and the occasional plot hole. In addition to all this, some things feel like they were left a little unaddressed and to say the least, the death of the main villain was anti-climactic. In fact, the villian was given very little time at all.

On the other hand, Brotherhood's ending is much more planned out, being foreshadowed as early as the first episode. It was very obvious that it was written out, in detail, from beginning, middle and end, which the first series definitely did not have the advantage of. Because of this, Brotherhood's ending is crisp, paced well, climactic and pretty damn epic. It's interesting and with no plot holes I could see (someone with a knack for finding them could probably find a couple though), and everything came together perfectly.

Now I don't want to give all the points to Brotherhood here, however.
I personally think that Dante was the more interesting villian. Yes, her plan was ill-fated from the beginning, but that just adds to her insane delusion. Just her presence, her ideas and even her past relationship with Hohenheim was just plain haunting. Yet her delusions made her that much less threatening as a bad guy. There wasn't really the feeling that she would destroy any more than our main characters.

Father in Brotherhood was a much more typical villain. There definitely was more tension because what he wanted was massive, which definitely allowed for a much more satisfying climax, but he just lacked that essence of pure evil that Dante had. He didn't have the same drive and manipulative power that made Dante such a convincing psychopath. If the two characters could have been combined, then that would have been a force to be reckoned with.

Now, about the very last episodes. Seriously, spoilers ahead, guys.
It is a strange choice, but I like the overall outcome of Fullmetal Alchemist better. Discount the movie here, I am talking about the ending to episode 52, where I view the series truly ended. Though definitely not a fan pleaser, I thought it was the perfect ending. Intensely bittersweet, but I was not disappointed in the least.

Fullmetal Alchemist ended with the two brothers separated, in two completely different worlds in two completely different dimensions, not knowing for sure if either were even alive. But despite this, the bond between brothers was shown to transcend even DIMENSIONS, and if that isn't inspiring I don't know what is. The message was simply beautiful. Even though it left it much more open-ended, it somehow felt more complete. I was not left feeling like I wanted to demand more, unlike Brotherhood.

Brotherhood's ending definitely satisfied the fan's wants more and was very Shounen in style with everyone living happily ever after, which should have satisfied me. But it just seemed too sugary sweet. Granted, I was esctatic about seeing the EdwardxWinry thing actually GO somewhere, but it wrapped too much up and left too little to the imagination for my tastes.

I know it has sounded like I have been bashing Brotherhood in the ground this entire time, that's definitely not the case. Those are the things I prefer in Fullmetal Alchemist, but the rest I think was done better in Brotherhood. I honestly have a lot of trouble deciding which I like better, and to be honest, my opinions kind of change day to day.

If I were to reccommend one of them, well... I don't know if I could pick. It just depends on the person. I would personally reccommend them both. I might reccommend watching the first series before Brotherhood, simply because the beginning is paced much slower, is 12 episodes shorter and because it's the first chronologically. Brotherhood definitely does not hold your hand in the beginning and while prior knowledge isn't needed, it can be helpful.

All in all, Brotherhood was the more "safe" of the two and definitely outdoes the first in terms of fluidity, plot and overall quality, but Fullmetal Alchemist's daring ideas both hindered it and also created an intensely unique and emotional experience.